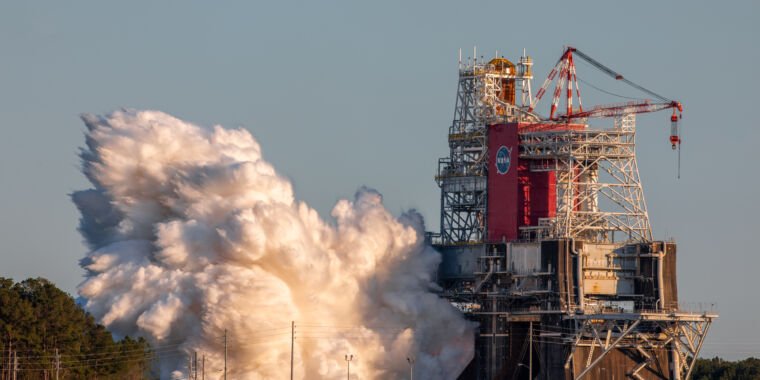 STENNIS SPACE CENTER, Miss – For a moment, it looked like the Space Launch System saga might have a happy ending. Under a bright blue sky late Saturday afternoon, NASA’s massive rocket came to life for the very first time. As the four engines lit and roared, thunder rumbled over these Mississippi lowlands. A gigantic, beautiful plume of white exhaust boomed away from the test bench.

It was all damn glorious until it suddenly stopped.

About 50 seconds after what should have been an 8-minute test firing, the flight control center shouted, “We’ve got an MCF on engine 4.” This means there was a “major component failure” with the vehicle’s fourth engine. After a total of about 67 seconds, the hot-burn test was over.

At a post-flight press conference held outside the test bench, officials gave few details about what had gone wrong. “We don’t know what we don’t know,” said NASA administrator Jim Bridenstine. “It’s not everything we hoped it would be.”

He and NASA’s program manager for the SLS rocket, John Honeycutt, tried to put a positive spin on the day. They explained that this is why aerospace hardware is being tested. They expressed confidence that this was still the rocket that would launch the Orion spacecraft around the moon.

And yet it’s hard to say that what happened on Saturday is anything but a bitter disappointment. This missile core stage was moved from its nearby Louisiana plant to Stennis more than a calendar year ago, with months of preparation for these critical test firings.

Honeycutt said before the test, and after again, that NASA had hoped to get 250 seconds of data, if not fire the rocket for the entire duration of its nominal ascent to space. Instead, it got a quarter of that.

Perhaps most intriguingly, Honeycutt said the engine problem cropped up about 60 seconds into the test, at one of its most dynamic moments. This was when the engines dropped from 109 percent of rated thrust to 95 percent, Honeycutt said. And it was also when they started to gimbal, or move their thrust axis.

After about 60 seconds, engineers noticed a “flash” in the area of ​​a thermal protection blanket around engine 4, Honeycutt said. The motor section is one of the most complex parts of the core stage, and each of the four main motors has thermal protection to limit the heating of the other motors.

Now, engineers from NASA, Boeing and the engine manufacturer, Aerojet Rocketdyne, will study data from the test to determine exactly what went wrong. It’s not clear how long this will take and what issues need to be fixed.

If there is a serious problem with Engine 4, it can be swapped. NASA has spare RS-25 engines at Stennis, including backups that have been tested and are ready, Honeycutt said. Such an engine change can take place on the test bench itself over the course of a week or 10 days.

An important question is whether another hot burn test will be necessary. Bridenstine, whose tenure as NASA administrator ends next Wednesday, said it was too early to say what will happen next. He expressed the hope that a clear problem would be found. Still, it seems unlikely that NASA will have enough data from this test to prevent another hot-burn test, which will likely require weeks to months of preparation.

All of this casts serious doubt on NASA’s plans to launch its Artemis I mission — an unmanned precursor to the mission to send humans to the moon — before the end of this year. Already on a tight deadline, the program had to ship the core phase from Stennis Space Center to Florida’s Kennedy Space Center in February to maintain the possibility of launch in 2021.

What the future has in store

The future of NASA’s Space Launch System rocket is not clear. The incoming Biden administration has not released detailed plans for the space agency. However, the big rocket’s backing has always come from Congress, not the White House. Congress created the booster a decade ago when the Obama administration wanted to rely more on private companies to provide launch vehicles.

The original deal was made between two Senators, Bill Nelson of Florida and Kay Bailey Hutchison of Texas, but they are both now out of office. In recent years, Senator Richard Shelby of Alabama — who chairs the powerful Appropriations Committee — has emerged as the missile’s most powerful backer. This is no surprise given that the rocket was designed and operated at the Marshall Space Flight Center in northern Alabama.

However, with Democrats gaining a slim majority in the Senate, Shelby has lost his chairman in the upcoming session of Congress. While he will retain much of the say, he will no longer be able to effectively dictate NASA’s budget.

The SLS has also received broad support from Alabama’s delegation in the House, but they too have recently lost some of their influence. Perhaps the most outspoken of the rocket’s House financier was Alabama Congressman Mo Brooks. But he has gained a measure of infamy for speaking at the pro-Trump rally on Jan. 6, prompting rioters to march toward the U.S. Capitol. While spreading misinformation about the election, Brooks said, “Today is the day Americans start scratching and kicking names.” Of the seven US representatives in Alabama, six are Republicans. All, including Brooks, voted to reverse the election results after the Capitol uprising.

Given these recent events, it seemed likely that the SLS program had a future if it started executing and achieving milestones such as Saturday’s test. The declining political clout of the Alabama delegation could mean the program has less of a firewall in Congress, should it continue to experience delays and cost overruns.

Congress created the SLS rocket in its authorization law of 2010, declaring it a “space shuttle follow-up launch vehicle.” The law said NASA must renew or amend existing contracts to build the rocket and ensure the “maintenance” of critical skills. The intent of the law was clear: to keep the shuttle staff employed.

At the time, proponents of this design claimed that relying on space shuttle hardware would minimize costs and technical problems.

This seemed somewhat logical. After all, these engines had flown for three decades. The solid rocket boosters had flown just as long. This was proven technology. The most difficult work would be designing and building large fuel tanks for liquid oxygen and hydrogen in the core phase of the rocket. However, liquid hydrogen was hardly a new fuel to work with. NASA had decades of experience building the shuttle’s large external fuel tank, and American rocket scientists, starting with Robert Goddard, had studied the use of liquid hydrogen since the dawn of the space age.

It’s all gone sideways since then. By the time Saturday’s test took place, NASA had spent about $17.5 billion developing the rocket, and many billions more on ground systems to launch it. The original launch date was 2016 and now the rocket is unlikely to fly before 2022. And while much of the hardware has a long history, NASA and its contractors still struggle to integrate it.

Last year, when NASA’s inspector general studied why it had taken so long to develop the SLS rocket, he found that the core stage, booster and RS-25 engine programs all had technical challenges and performance issues leading to delays and cost overruns. .

“We and other regulatory entities have consistently identified contractor performance as a primary cause for the increased costs and schedule delays of the SLS program, and quality control issues continue to plague Boeing as it strives to complete the missile’s core phase. complete,” wrote Paul Martin. “Both NASA and contractor officials explained that nearly 50 years have passed since the development of the last major spaceflight program — the Space Shuttle — and the learning curve for new developments is steep as many experienced engineers have retired or moved to other industries. have moved.”

So what was seen as a strength of the program, the use of heritage hardware, instead became a liability. Saturday was the first real hardware test for the rocket. It can’t afford too many more commitments like the ones on display.