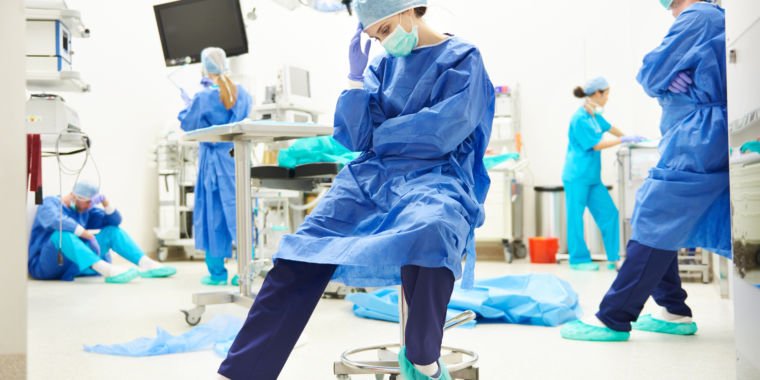 After more than a century of cutting small, inflamed organs from people’s guts, doctors have discovered that surgery may not be necessary after all — a simple course of antibiotics can be as effective in treating appendicitis as going under the knife.

The disclosure comes from a large, randomized study from Finland, published on Tuesday, September 25 in JAMA.

Despite a long-held standard of care being reversed, the study’s finding isn’t entirely surprising; it follows several other randomized trials over the years that had provided evidence that antibiotics alone can treat acute appendicitis. However, those studies left a number of pending questions, including whether the antibiotics only temporarily improved the situation and whether the initial drug treatments later made patients worse off when they needed surgery.

The new JAMA study, with its full five-year follow-up, effectively cauterized those remaining issues. Nearly two-thirds of the patients randomly assigned in the study to receive antibiotics for uncomplicated appendicitis ultimately did not require surgery in the follow-up time, report the Finnish authors, based at the University of Turku. And those drug-treated patients who later had appendectomy were no worse off because of the delay in surgery.

“This long-term follow-up supports the feasibility of antibiotic-only treatment as an alternative to surgery for uncomplicated acute appendicitis,” the authors conclude.

The finding suggests that many patients with appendicitis can be spared the risks associated with surgical procedures, such as infections. They may also be able to save money by not needing such an invasive procedure (although the study did not compare costs), and they can benefit from shorter treatment and recovery times. However, researchers will need to collect more data to support those benefits.

For their first look at the simpler treatment of appendicitis, researchers led by Paulina Salminen randomly assigned 530 patients who showed up to the hospital with acute, uncomplicated appendicitis to undergo either standard open surgery to remove their inflamed organ or have an antibiotic treatment. (By “uncomplicated,” the authors mean that there were no other problems, such as perforation, abscess, or suspected tumor.)

A few patients were lost during follow-up, including one due to unrelated death, leaving 272 patients in the surgery group and 256 in the antibiotic group.

In the antibiotic group, 70 patients were operated on within the first year of treatment. Over the next five years, 30 others also underwent surgery. That left 156 antibiotic-treated patients, or about 61 percent, who were able to escape the scalpel.

The authors think that percentage could be even higher in future research. They note that after initial randomization, the decision to have surgery was entirely up to the patients’ treating surgeons — most of whom were not involved in the study and some of whom were skeptical that antibiotics alone would prevent appendicitis. could treat. This fact, the authors note, could have artificially increased the number of people who ended up having appendectomy. They point out that seven out of 100 antibiotic-treated patients who underwent surgery had no evidence of appendicitis at the time of their surgery, based on their medical records.

Still, going on antibiotics first meant fewer complications and faster recovery overall. The antibiotic group had a complication rate of 6.5 percent, while those who underwent surgery had a rate of 24 percent, mainly due to infections. Of the 100 antibiotic-treated patients who later had surgery, they had typical complications before the procedure. This suggests that delaying surgery did not lead to more problems for this group.

Complications or not, the antibiotic group generally needed an average of 11 days of sick leave to recover, while the surgery group needed 22 days.

There were a few catches to the study that warrant follow-up. A big problem is that the study compared antibiotic treatment to standard open surgery — not a more modern, minimally invasive laparoscopic surgery, which is now common in the US. Had this been the standard of care in the surgery group for this study, it would have shifted the cost-benefit scale, potentially reducing complications and recovery times.

That said, the authors note that the antibiotic treatment was also heavy-handed in the study. The researchers went with a “conservative” three-day IV treatment followed by more oral antibiotics, which may have been an exaggeration. They did this because”[w]When this protocol was designed, little information was available to guide the application of antibiotic treatment for appendicitis,” they note. Future studies could show that shorter, less intensive courses of antibiotics could also be the solution, further reducing complications and treatment time.

Finally, the study did not compare the costs of the interventions or the bills that would have been incurred by those in the two treatment groups. This will be another question to address in future studies as doctors fine-tune the best way to treat appendicitis after all these years.