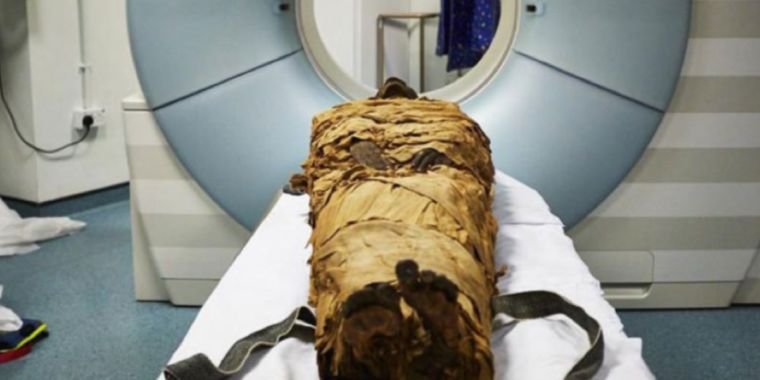 Around 1100 BC, during the reign of Ramesses XI, an Egyptian scribe and priest named Nesyamun spent his life singing and chanting during liturgies at the Karnak Temple in Thebes. As was customary at the time, after his death Nesyamun was mummified and sealed in a coffin, inscribed “Nesyamun, True of Voice (mate kheru).” His mummy has become one of the most well-studied artifacts over the past 200 years. We know, for example, that he suffered from gum disease and may have died of some sort of allergic reaction in his 50s. The inscription on the coffin also expressed a wish that Nesyamun’s soul would be able to speak to his gods from the afterlife.

And now Nesyamun gets his dearest wish. A team of scientists has reproduced the “sound” of the Egyptian priest’s voice by creating a 3D-printed version of his vocal tract and connecting it to a speaker. The researchers revealed all the gory details behind their project in a new Scientific Reports article.

“He had a desire that his voice would be eternal,” study co-author David Howard of the Royal Holloway University of London told IEEE Spectrum. “In a way, you could argue that we’ve heeded that call, which is a little odd, but here we are.”

The study of vocal tracts is a very active area of ​​research. For example, voice scientist Ingo Titze of the University of Utah has experimented with the excised vocal cords of lions and Siberian tigers. (The body parts were obtained from animals that died of natural causes in several zoos.) In a memorable 2006 experiment, Titze mounted a cut tiger larynx — three times the size of a human vocal tract — on a lab bench for a series of experiments.

One experiment involved blowing air through the structure while taking CT scans. Based on that, Titze was able to build a computer model that could simulate the four types of tiger sounds: roar, growl, groan and ‘crush’. Sure, the computerized vocalizations sounded more like a cow experiencing extreme stomach upset, but studies like this still provide insight into the intricacies of how the vocal tracts function in different species.

There have been multiple studies placing human singers in MRIs to track the mechanics in the game, including demonstrating polyphonic singing and how the larynx changes to produce different styles of singing. For example, German baritone Michael Volle performed “Song to the Evening Star” in 2016 on Wagner’s Tannhauser during an MRI scan. More relevant to the current article: Also in 2016, a team of Italian researchers reconstructed Ötzi the Iceman’s vocal cords and used it to reproduce what his voice sounded like. (He usually sounded like he was burping.) Many previous attempts have tried to mimic an old person’s voice using software to animate a reconstructed image of the person’s face, which is a good approximation. of what that person might have sounded like.

But according to Howard, no living person today has been able to hear the sound of human speech prior to the earliest audio recordings in the mid to late 1800s. That’s one of the reasons he and his colleagues chose Nesyamun as their subject, further emboldened by the priest’s apparent desire to let his voice live on. “Given Nesyamun’s expressed desire to make his voice heard in the afterlife to live forever, the fulfillment of his beliefs through the synthesis of his vocal function allows us to connect directly with ancient Egypt by listening to a sound from a vocal tract that hasn’t been heard for over 3,000 years,” the authors wrote.

Humans produce sound through the vocal cords or folds. Air from the lungs passes through and the folds vibrate to produce sounds that are then modified by the shape of the vocal tract. The positions of the lips and tongue, and the soft palate, also affect the type of sound produced.

This latest work is based in part on Howard’s 2013 development of a “vocal tract organ,” a device that plays vowels via a 3D-printed replica of a larynx. It caught the attention of an archaeologist at the University of York, co-author John Schofield, and an interdisciplinary project was born. Nesyamun’s mummy was the perfect choice because it was remarkably well preserved and the shape of his vocal tract was largely intact, although the actual tissue had dried up.

First, Howard et al† took CT scans of the mummy and used those images to create a digital model, which dictated the shape of the 3D-printed vocal tract. Then they synthesized an input signal, relying on modern speech synthesis, and played it through a loudspeaker in the artificial larynx. There were some extra touches, such as adding a coupling cylinder to connect the end of the larynx to the speaker and tuning the resulting frequency range to something akin to the descending intonation of a male voice.

This way, Howard et al† were able to reproduce one sound in particular, falling somewhere between the Anglophone vowels “bed” and “bad”. (The BBC compared the sound to the barking of a sheep.) It sounds a bit buzzy, as the vocal duct is plastic, but Howard claims it’s nonetheless very close to how the priest would have pronounced those same vowels, citing previous studies using 3D voice channels from living humans. “I can recreate my vocal tract and then you can hear it next to me and see if it’s similar or not,” he told IEEE Spectrum. “The answer is, it is. We use that fact to translate this 3,000 years back and say we have something like what Nesyamun would have sounded like.”

This is certainly very cool research, tailored to generate irresistible clickable fodder for our internet age. But a few caveats are in order. For example, Howard acknowledges that their 3D model is based on the shape of the priest’s voice as he lies down, not standing in the temple chanting or chanting. The neck is tilted back, the tongue is placed on top of the lower teeth, and no real air passes through (unlike Titze’s experiments with the Siberian tiger’s larynx). And although Nesyamun’s vocal tract was very well preserved, he had no soft palate and the tongue was atrophied.

“One day it will be possible to produce words as close as possible to what it would have sounded like.”

“Overall, I think it was a well-crafted study,” Daniel Aalto of the University of Alberta – who was not involved in the study – told me. Scientific American† †[But] what makes a voice recognizable in humans — and what creates our unique voice — is not just the shape of the vocal tract, but how we use our vocal cords.” The audio in the current study was created from a mechanical source, not living vocal cords So it’s still just an approximation of Nesyamun’s voice.

“Even if we had the precise 3D geometric description of the mummy’s voice system, we wouldn’t be able to exactly rebuild its original voice,” speech scientist Piero Cosi of the Institute of Cognitive Sciences and Technologies in Italy told The New York Times. Cosi was a member of the team that reproduced the “voice” of Ötzi the Iceman.

The next step in the project is to replicate the sound of Nesyamun’s chant, which would require precise computer manipulation to change the shape of the vocal tract as needed — possibly even letting him “speak” the original words written on the coffin of the priest were written. “He certainly can’t talk right now,” Howard admitted to the Times. “But I think it’s perfectly plausible to suggest that one day it will be possible to produce words that are as close as possible to what it would have sounded like.”