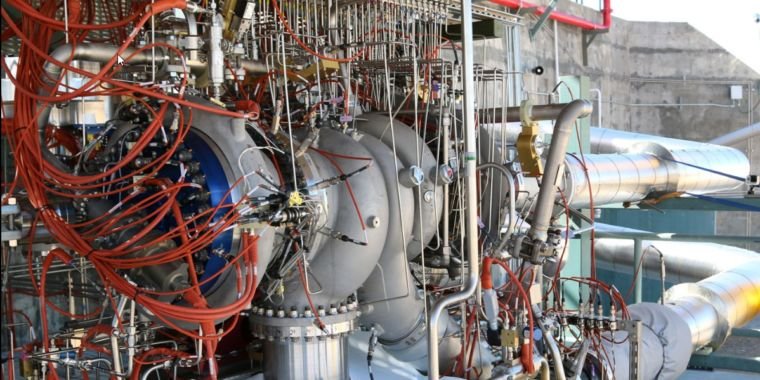 Since the first successful suborbital flight of its New Shepard spacecraft and rocket, Blue Origin has been living a charmed life. The company, founded by Amazon’s Jeff Bezos, has launched its reusable vehicle five times and landed it safely. It splashily announced an upcoming orbital rocket, New Glenn. And Bezos himself has won a number of aerospace awards for his achievements.

But on Sunday, Blue Origin announced a setback. “We lost a set of powerpack test hardware on one of our BE-4 test benches yesterday,” said the company tweeted. “Not unusual during development.” The company refused to provide Ars with more information about the accident, but most likely the power pack, that is, the turbines and pumps that supply the fuel-oxidizer mixture into the rocket engine’s combustion chamber, exploded.

It’s not clear if the test stand itself suffered serious damage (the company has at least two stands in its rocket engine test facilities near Van Horn, Texas), nor if the engine hardware was pushed to its limits, or if this was part of routine testing while Blue Origin is moving towards a full engine test. While no details were released, Blue Origin added that it expects engine testing to resume “soon”.

The fact that Blue Origin, a relatively secretive company, shared this information at all is a bit revealing. Specifically, it suggests that the company continues to take steps toward openness. This is the first time it has publicly shared information about technical issues during hardware development.

This doesn’t seem likely to be a major stumbling block for Blue Origin unless the failure has exposed a fundamental flaw in the design of the BE-4 engine, which seems unlikely. Such accidents are rather a common part of engine testing. High pressure and combustible fuels are inherently an explosive mix. And since the company is well capitalized due to Bezos’ deep pockets, it has redundant sets of engine hardware both at the test site and under development at its Washington headquarters, meaning it can fix the problem and move on.

In addition, this accident should not affect the company’s plans to continue flight testing of New Shepard later this summer or early this fall. That launcher uses the smaller BE-3 engine, which has been well tested. Commercial suborbital flights of New Shepard could begin as early as 2018.

The BE-4 engine, about five times more powerful than the BE-3, is counted on to power Blue Origin’s large New Glenn rocket, which could fly as early as 2019 or 2020. Major US launch provider United Launch Alliance is also closely watching development of the BE-4 engine because if tests are successful, Colorado-based ULA plans to select the BE-4 engine to launch its next generation Vulcan launcher.

In an interview with Ars last month, Rob Meyerson, president of Blue Origin, said the company would not rush to test the BE-4 engine at full scale. “We’ll test it when we’re ready, which could be weeks, or a few months,” he said. Powerpack testing is a precursor to full-scale testing of the whole engine, so with the latest setback we can probably safely assume that Blue Origin is still a few months away.