After 15 years in a vegetative state, the patient becomes minimally conscious | Techilink 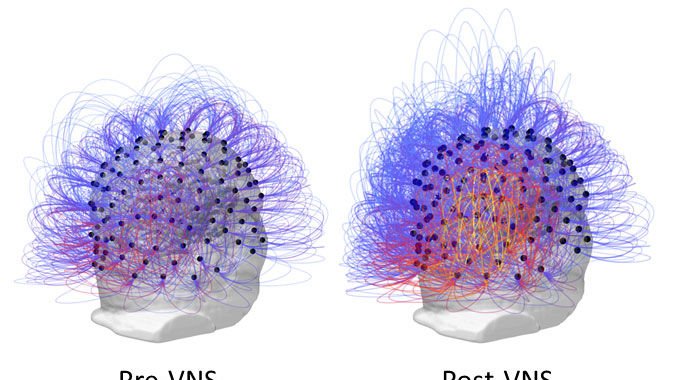 After 15 years in a vegetative state, a 35-year-old male patient in France appears to have regained minimal consciousness after months of vagus nerve stimulation, researchers report today in Current Biology.

The patient, who suffered severe brain damage in a car accident, previously showed no signs of consciousness or improvement. He made no obvious deliberate movements and did not respond to doctors or family at his bedside. But after researchers surgically implanted a device that stimulates the vagus nerve, quiet parts of his brain began to brighten up, just like he did.

His eyes were on people talking and could follow a moving mirror. He turned his head to follow a speaker moving around his bed. He shook his head slowly when asked. When investigators suddenly got very close to his face, his eyes widened as if surprised or frightened. When caretakers played his favorite music, he smiled and cried.

The newfound activity elevated his clinical status from vegetative to minimally conscious – an improvement, but still a severely disabled condition. Still, it gives the researchers optimism that this type of nerve stimulation could help treat other patients with severe brain damage and impaired consciousness. The fact that he was in a vegetative state for so long beforehand makes the results even more convincing, they say. (The odds of regaining consciousness after a year in an unresponsive state are rather dismal.)

However, other researchers were much more cautious in their interpretation of the study. On the one hand, it only concerns one patient. And while the patient improved, it wasn’t a major improvement and is “of questionable significance to the patient,” said Dr. Elizabeth Coulthard, an expert in dementia neurology at the University of Bristol.

In a statement, Coulthard continued:

While it is suggested that this may open the way for future research, no clinical benefit can be deduced from this single patient. Even the small change shown here may not be transferable to other people in a persistent vegetative state.

Using vagus nerve stimulation to stimulate brain activity is not a new idea. The nerve is thought to play an important role in consciousness. It extends from the brain, skims past the heart and ends in the large intestine. The central lead carries a variety of bodily and visceral signals. When stimulated, it stimulates metabolism in the forebrain and is believed to play a key role in alertness, arousal, and fight-or-flight responses.

Vagus nerve stimulation therapy is already being used to prevent epileptic seizures by sending regular, mild pulses to the brain. And some early research has provided evidence that electrical shocks to the brain — including via the vagus nerve — may help people with traumatic brain injuries. In particular, stimulation of the vagus nerve has been shown to improve recovery in brain-injured rats.

The new study is one of many clinical attempts to test the method in humans.

For their test, the French researchers turned to an implantable, programmable device approved for use in patients with epilepsy. The gadget, installed on the left side of the chest, delivers gentle pulses through a double-coil electrode wrapped around the vagus nerve at the neck. In the six months after the operation, the researchers gradually increased the pulse intensity to a maximum of 1.5 mA.

Scans and tests performed before and after implantation showed an improvement in brain activity. The researchers saw an increase in theta waves, an increase associated with the transition from a vegetative to minimally conscious state. Positron emission tomography (PET) scans indicated that brain metabolism was also stimulated.

Analyzing electroencephalogram (EEG) data, the researchers found that connectivity and information sharing increased in the brain. Finally, they noted increased activity in the parieto-temporal-occipital border, which is “a region labeled a hot zone for conscious awareness,” the researchers report.

Dr. Uzma Samadani, a neurologist and expert in traumatic brain injury [TBI] research at the University of Minnesota, expressed its delight in the study and its findings. “I am an emphatic supporter of this line of research,” she tells Ars.

Together with colleagues, Samadani is conducting an experiment herself to test stimulation of the vagus nerve in patients with brain injury.

“I believe we do not fully understand the mechanisms of impaired consciousness associated with trauma, but vagus nerve stimulation appears promising in this isolated case report,” she said. “Despite the fact that this is only one case, I am encouraged that this will prove to the funding boards that this is an area that should be considered. Our own work is currently being conducted using non-invasive VNS [vagus nerve stimulation] in moderate TBI patients, and we look forward to sharing our results in the future.”