A visit to World of Warcraft, nine years after I left |Techilink 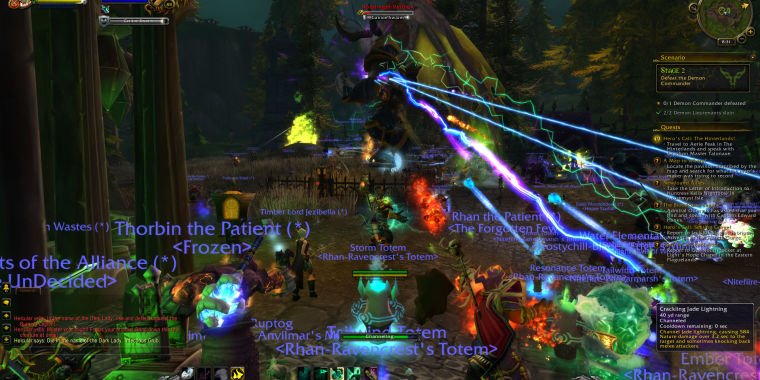 That’s still a little hard to believe World of Warcraft has been around long enough for people to feel nostalgic about “the good old days.” On this point, Wow has been around longer than what will surely be a significant portion of its player base has been alive. We’re talking 11 years of clicking little icons on bars, watching spells cool down, and saving up enough gold to buy a shiny new mount that’s all the way better than your other functionally identical holder.

The latest expansion, Legion, is definitely an attempt to fuel that nostalgia. Familiar faces and locations return from throughout the game’s tenure as the premier MMO around. That seems perfectly aimed at players like me. It’s been nine years since I last played World of Warcraftin my halcyon high school days of 2007, when I had enough time to sink into the game’s first expansion, The Burning Crusade.

So when I went to see the nostalgia tinged review Legion (how do you rate something on this scale?), I felt I needed to see what two presidential terms of updates and expansions had already done to the game I knew and loved. What changed? What stayed the same? What did “Hearthstone” mean before it was a collectible card game? This is my story of the Rip van Winkle culture shock I experienced when I once again visited a virtual place I hadn’t lived in years.

When I was 17 I remember being enchanted by the sheer scale of Azeroth, the world on which war was made. I imagine it was the same for many players back then, faced with a almost seamless planet worth of land, sea and sky to explore. The downside to this sense of scale was that it took forever to get from point A to point B. Especially in the early stages of the game, completing the simplest fetch quests is an effort of stamina.

Pandaria, on the other hand, runs like an Italian train station. The starting area of Wow‘s panda-centric third expansion, which I missed when it came out in 2012, has barely enough slow moments to build anticipation for what comes next. And what comes next is usually much more interesting – if only visually – than anything I remember from 2007.

While talking to a giant turtle carrying the landmass on its back, a la Discworld, I suddenly discovered that two very different fantasy worlds from my teenage years were being welded together. I soon helped blow a hole in his side and watched rivers of blood pour into the ocean. That was considerably less majestic.

Playing another character, a monk named Bigknucks (I tell myself his parents knew he would be all about hitting things one day), I had to revisit the Dranei starting area where I The Burning Crusade. Bigknuck’s starting zone and much of the surrounding content did not fare well with a distance of nearly decades. Now the Dranei’s starting area seemed as slow as someone impaling with a mage’s ice lance.

For fun, I also checked out the goblin and “Worgen” (aka copyrighted werewolves) starting areas. These were included disasterthe previous enlargement pandariabut they were still new to me.

The story was much the same: lots of bombastic, varied activities, interspersed with voice acting now over the two to three syllables I enjoyed years ago. These “new” opening areas feel violently propulsive in a way the older parts of the game just weren’t.

Most of them were in there World of Warcraft’The concentric tree rings of content showed clear progress, but there was one major exception. Honestly, I found it hard to see much change in the disaster expansion that came out three full years after I left the game. Largely that’s because I’m now playing as an Alliance Dranei, rather than a Horde Tauren. So the disastrous Alliance locations I first see are probably the only versions of those areas I ever see.

Perhaps that’s why the heaviest salvo of nostalgia World of Warcraft hit me with entered somewhere else Legionpre-launch content. Across both main continents of Azeroth, the Burning Legion – a group of green cenobites from outer space made up mostly of demons – launches its invasion. It’s a taste of things to come in the expansion proper, and it’s an excellent way to grind and loot XP, assuming you’ve got the patience.

One such invaded area is a Horde-controlled fortress called Hillsbrad. I could have sworn this area was ruled by goddamn, filthy people back in 2007, and the game reminded me of this when the town’s leader yelled to rally all nearby players to defend Hillsbrad, bellowing something along the lines of ” Whether you love Hillsbrad, or knew it in the past, you must fight to protect it!”

This was exactly the kind of callback I was expecting Legion content, given how Blizzard has positioned the expansion so far. Ironically, since I played Horde then and now Alliance, I’m pretty much the best example of someone who shouldn’t care about that city. Ah, well. Still, it was a cute moment.

Faces you’d rather not see

World of Warcraft seems very light on those cute moments these days. Everything leads to the Legion expansion is presented as an incredibly terrible disaster, with many of those “familiar faces” I mentioned belonging to some really bad guys.

The magically evil Gul’dan from the original Warcraft games has apparently not been killed off and is now taking on the role of the central villain. Illidan, the treacherous villain who was last seen alive when I was playing World of Warcraft in all seriousness, is also returning, though it’s still not clear what role he’s playing this time around.

Gul’dan still seems like bad news, though. After getting Bigknucks to level 98, I was able to unlock my first “Scenario”. These cutscene narrative events are probably old news to many Wow players, but it was all new to me watching a Norman naval invasion of Legion territory. A lot of seemingly important characters died horribly at the hands of Gul’dan.

From a technical perspective, the cutscenes here seemed particularly impressive, even rendered using the game’s own engine (unlike those gorgeous pre-rendered songs you see in all the trailers). It’s clear Blizzard is pushing their own technology to the limit with these new scenes, in a way they probably never intended. To be mainly clear how far technology has come when you compare the new cutscenes to the pandariaera cutscenes, which now seem like visual history told in low-grade textures and video compression.

But mostly what I did World of Warcraft are those damn legion invasions. They’re essentially just organic kill quests, where you and five hundred of your best friends slay demons for ten to twenty minutes. They are all almost identical and they only occur in the same six places in Azeroth.

That’s a shame, since none of them are set in zones I’ve never visited. Northrend, central location of the Wrath of the Lich King expansion, only persists to me as a name on a map. The same goes for Draenor. And while I visited Outland during The Burning Crusade, there’s no good reason for me to return.

Instead, at the behest of my friends, never stopped to play Wow, I’ve led those goddamn demon invasions over and over again. Visually they are very impressive which further shows how far Blizzard is extending their technology. But today’s game seems driven more than ever by the need to grind those experience points and hit that level cap. I was actively encouraged to skip most of the game’s deeper content – dungeons, raids, PVP, etc – as it will all be moot at some point Legion coming.

I’m well aware that this is largely “the way things are” for an MMO, but to have all the raw numbers condensed into one week like this was something else entirely. Hopefully Legion itself will be worth this particular effort.

Returning after nine years away Wow, I also caught up with the general consensus on the game’s progress so far. One novelty in particular caught my eye: the latest expansion, Warlords of Draenor, was largely considered not so hot. As well as being more expensive than its predecessors, it was also light on content, both at launch and in the year that followed.

As a result, there seems to be a lot of goodwill floating up Legion. Blizzard seems to know it too, given all the callbacks to the early days of both Warcraftand World of Warcraft. By reintroducing fictitious names and faces that even a lapsed player like me can recognize, they seem to be actively trying to remind players of a time before the disappointment of Draenor.

So far, my return to the game’s pre-expansion has felt a bit broad and shallow. That almost seems obvious, since almost everything “worth doing” in the game has been put on hiatus leading up to Legion. I have to admit, this frozen moment has me anticipating all the new tidbits the expansion will throw at me. I wonder if that would still have been the case had I spent the past nine years chewing through what Azeroth had to offer at its natural pace.