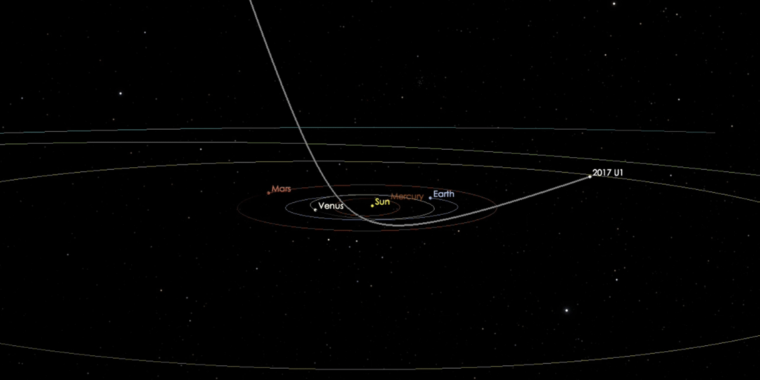 Last week, some scientists at Harvard University sparked widespread media attention about a possible extraterrestrial origin for the mysterious interstellar object known as ‘Oumuamua. At the end of a paper speculating on the object’s observed motion, the authors presented “a more exotic scenario” suggesting that “Oumuamua” may be a fully operational probe deliberately sent to the Earth’s environment by a alien civilization’.

As we reported at the time, this bizarre theory may have been catnip to online news editors, but there just wasn’t much evidence to take it seriously. Now, thanks to some previously unpublished observations from NASA, we can further soften the idea.

The object now called ‘Oumuamua came closest to Earth in September 2017, and astronomers first spotted it in October of that year when it started moving away. When NASA trained its Spitzer space telescope in November where astronomers expected to find Oumuamua, it found nothing over the course of two months of observations in the infrared part of the spectrum.

“‘Oumuamua was full of surprises from day one, so we were curious to see what Spitzer would show,” said David Trilling, lead author of a new study detailing these observations and a professor of astronomy at Northern Arizona University. “The fact that ‘Oumuamua was too small for Spitzer to detect is actually a very valuable result.”

The non-detection sets an upper limit on the size. While the interstellar intruder is believed to be a tall, cigar-shaped object, the models astronomers used with the Spitzer data produced estimates for the object’s diameter as if it were a spherical object. Based on various assumptions about the composition of the object and the amount of light it reflects, the upper limit of ‘Oumuamua’s ‘spherical diameter’ is 100 to 440 meters.

This is important, as this smaller size may explain one of the mysteries surrounding ‘Oumuamua. Analyzes based on multiple telescopes pointed at the object late last year showed that it was accelerating away from our sun significantly faster than could be explained by gravity alone.

The smaller size supports the theory that the object’s outgassing — frozen gases that heat up as ‘Oumuamua approached the sun — could have acted as thrusters to accelerate its movement (see short NASA video above). In the absence of other evidence, this natural theory seems more plausible than a visit from an alien probe.