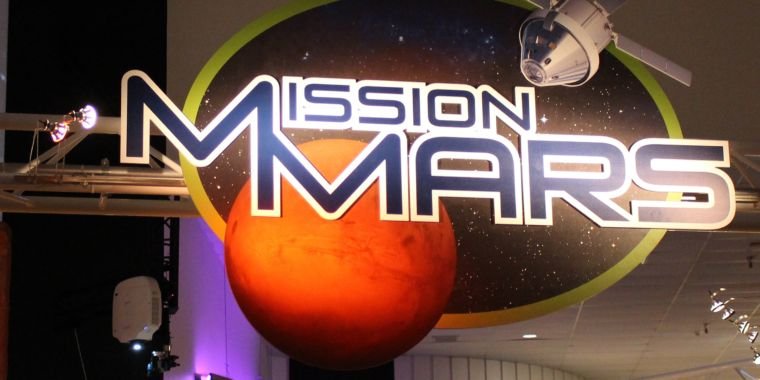 I wasn’t sure what to expect when I walked into the new Mars exhibit at Space Center Houston. For technical and financial reasons, as well as dwindling national commitment, it just doesn’t seem like NASA will be sending humans to Mars any time soon. The space agency’s “Journey to Mars” is a long hype, but few concrete plans and funding. That said, the thought of actually landing on Mars remains hard to resist.

The museum had invited Ars for a behind-the-scenes tour of Mission Mars in January, just before it opened as a permanent exhibit. While some final work was still in progress, the exhibit had progressed far enough to conclude—fortunately—that NASA’s journey to Mars won’t be shoved down visitors’ throats. Rather, the museum acknowledges that NASA’s priorities may change as new presidential administrations come and go.

“At some point, people will have to leave the Earth,” explains Paul Spana, the museum’s exhibition manager. “It is human nature to move on, to the next valley. We’ve been to the moon. Hopefully we’ll go back soon. But if we eventually expand into the solar system, Mars is the next logical place to go. We want to help people understand what that could be like.”

Mission Mars includes a multi-story 4K video showing a virtual surface of Mars and what a human landing might look like. Towards the end of the video, two astronauts emerge from the landing craft to explore. “When I made this video, only one astronaut came out,” Spana said. “And the Johnson Space Center said, ‘No, we never send just one astronaut alone. You must add a second astronaut.”

The video plays in the background as displays show what we know about Mars, how to travel there and why humans will one day go. An interactive feature allows visitors to leave their footprints in a digitally rendered surface of Mars. Three Mars meteorites have been loaned by a private collector in San Antonio, and visitors can also touch a Mars meteorite borrowed from NASA’s Astromaterials lab, located across the street at Johnson Space Center. Since only about 150 meteorites have been confirmed as coming from Mars, seeing four at once is a rare treat.

For a long time, Space Center Houston had a full-size replica of the space shuttle’s nose cone in the back of the main concourse. This made sense, given that Space Center Houston is the visitor center for JSC, home of the space shuttle. But now that the shuttle program has ended, Spana says it’s time to move on. (In homage to the shuttle, the mock Shuttle Independence is now displayed atop NASA’s original Shuttle Carrier Aircraft, a modified Boeing 747 jet, outside the space center).

Now the permanent Mars exhibition has taken this top spot. “We knew the shuttle program was coming to an end and we wanted to be able to tell a story about the future. NASA won’t go to Mars next year, but we will go there one day,” Spana said. And now everyone will soon be able to get as close as possible to Mars by visiting the museum.