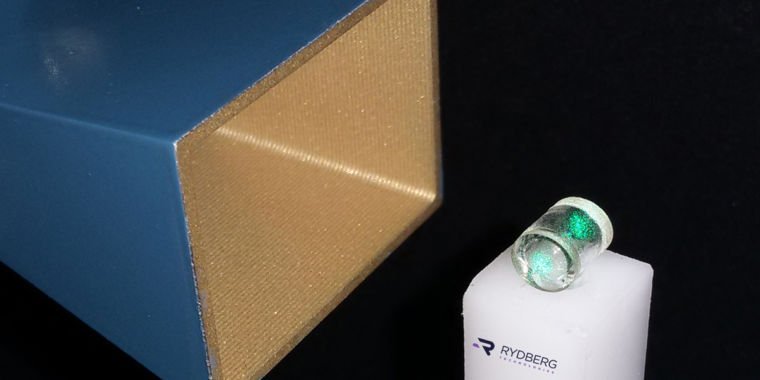 In the 1950s, atomic clocks revolutionized accurate timekeeping. Now we may be on the eve of the so-called “atomic radio”, thanks to the development of a new type of antenna that can receive signals over a much wider frequency range (over four octaves) that is highly resistant to electromagnetic interference .

An antenna is usually a collection of metal rods that pick up passing radio waves and convert their energy into an electric current, which is then amplified. You could argue that the good old-fashioned radio antenna has served us well since the early 1900s, so why do we need something to replace it?

According to David Anderson of Rydberg Technologies, those antennas are wavelength dependent, so their size depends on the wavelength of the signal they’re trying to measure (they should be about half the wavelength they’re designed for). That means you need antennas of different sizes to measure different radio frequencies.

Anderson is a co-author of a new paper posted to arXiv describing a new alternative to conventional antennas based on vapor cells filled with a gas of so-called “Rydberg atoms.” That just means that the atoms are in a particularly excited state, well above their ground state (lowest energy). This makes them particularly sensitive to passing electric fields, such as the alternating fields of radio waves. All you need is a means to detect those interactions to turn them into quantum sensors.

“You can design the receiver to operate on any frequency you want and avoid deliberate electromagnetic interference much more easily.”

The Rydberg Technologies team realized they could zap their vapor cells filled with excited cesium atoms with laser light tuned to just the right critical frequency. This saturates the atoms so they can no longer absorb light, allowing a second laser beam to pass right through them, effectively making the gas transparent. The critical frequency at which this transition occurs will change in response to a passing radio wave, so the light from that second laser beam will flicker in response. The vapor cell becomes a purely optical radio wave detector, with no wires or circuitry required.

In addition, according to Anderson, it is able to measure pulsed and modulated RF fields, which is how information is transmitted over the air. They’ve already tested the concept using AM and FM microwaves to transmit recordings of several team members singing “Mary Had a Little Lamb” — a nod to Thomas Edison, who sang the same song when he invented the phonograph in 1877.

The all-optical nature of the vapor cells means that even if they are hit by a massive burst of electromagnetic radiation, such as that from a solar flare, they won’t be permanently damaged because there’s no circuit for firing. This is a major concern for the power grid or certain defense systems and satellites. A nuclear antenna would also be less vulnerable to the recent spate of suspected microwave attacks on US embassies in Cuba and China. And the cells are ideal for secure communications. “You can design the receiver to work on any band or frequency you want and avoid deliberate electromagnetic interference much more easily,” says Anderson.

The detector cells are quite small, just millimeters in size, with the potential to shrink them even further. However, they require a significant backup system to operate, which is not miniaturized. “You won’t have a radio receiver that fits in a car dashboard these days,” says Anderson. “But the atomic clock paved the way for what we now call quantum technologies,” and they started out as large tabletop models. Eventually, scientists figured out how to make them small enough to fit into commercial systems.

Anderson envisions a similar trajectory for atomic radio. He is confident that in a few years they will have a suitcase-sized system that would fit perfectly into an airplane or ship, for example — ships that would welcome the added protection against interference and electromagnetic pulses of these detector cells. And maybe one day these vapor cells will replace those pesky car antennas with something more aesthetically pleasing.