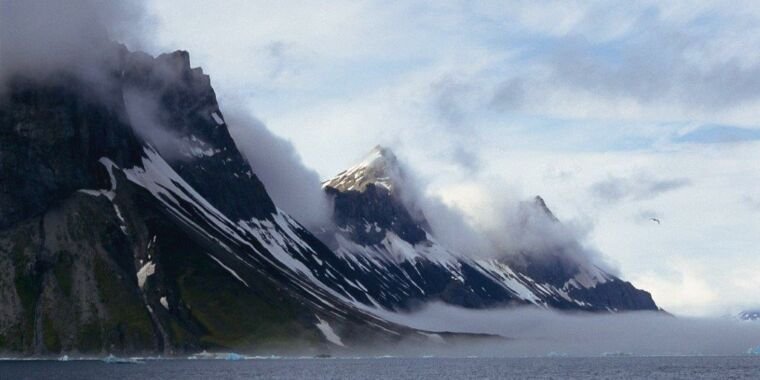 The rapid rise in global temperature over the past century is almost certainly unprecedented in Earth’s recent history, but our current rate of sea level rise has fiercer competition. About 14,650 years ago, when the last of the ice began to thaw, sea levels made a remarkable jump of 12 meters or more — in less than 400 years. It is an event known to scientists as Meltwater Pulse 1A.

Figuring out where all that water came from wasn’t easy. It was certainly the result of melting glacial ice (it didn’t just appear all of a sudden), but models of past ice sheet changes didn’t quite add up.

A new study led by Jo Brendryen of the University of Bergen follows an interesting route to find that the melting of the largely overlooked Eurasian ice sheet could explain things.

Looking for a date

It basically comes down to carbon dating – measuring the amount of radiocarbon-14 in something to calculate its age. Carbon dating works a little differently than other types of radiometric dating in that carbon-14 is constantly produced by reactions in Earth’s atmosphere. Everything that takes up carbon atoms – including living things – will therefore have a comparable amount to the atmosphere; once it stops that uptake, carbon-14 will gradually decay and turn into nitrogen-14. The older that thing is, the less carbon-14 is left in it.

One complication is that the rate of production of carbon-14 in the atmosphere varies slightly over time. However, because this technique can’t be used until about 50,000 years or so in the past, scientists have been able to measure things with known ages (such as tree rings) to check and calibrate carbon-14 concentrations to ages.

So just subtract the correct number when you’re working with deep sea monsters and it’s solved, right? Well, the problem is that the “correct number” depends on the ocean circulation on that spot and in that time† This generally leads to a lot of weeping and gnashing of teeth in paleoceanography.

Back to the ice caps. During the last ice age, an ice sheet once stretched across Scandinavia and the Barents Sea. The record of the shrinkage is based on carbon dating of sediment cores on the seafloor, pinpointing the times when the ice retreated and life returned to a location. The reconstructions have shown that the ice here had basically melted before the start of Meltwater Pulse 1A, giving it a clear alibi. But the carbon-dated ages assumed that the deceleration of carbon-14 in the deep ocean in that region was constant over time, in keeping with the modern pattern.

In this new study, the researchers looked closely at that assumption. They turned to a seemingly unlikely source: a cave in China. There’s actually a pretty good correlation between ocean circulation, North Atlantic temperatures, and Asian monsoon rains, linked by a series of climatic dominoes. Cave records have excellent timelines, with annual layers and uranium radiometric dating.

By aligning the cavern and sediment records of the Norwegian Sea, the researchers avoid having to guess the unknown carbon-14 lag in the deep ocean. Instead, they can calculate that delay and its changes, providing a new calibration for seafloor paleoclimate records in this region.

With that done, the reconstructed timing of the melting of the Eurasian ice sheet shifts. Instead of showing the local ice melting before Meltwater Pulse 1A even started, they see a major ice loss during this event. Earlier reconstructions may have credited the Eurasian ice sheet for perhaps one meter of the 12 or more meters of sea level rise that occurred then. This study boosts that contribution to about five meters — plus another meter or so in the next century.

There are obvious challenges in figuring out which giant block of ice melted thousands of years ago. But there are valuable clues. When an ice sheet melts, the sea level does not rise at the same rate all over the world. The pull of a huge ice sheet actually pulls seawater toward it, raising the sea level a bit near the ice sheet. As the ice sheet shrinks, its gravitational pull relaxes, so sea level may actually do that fall right next to the ice sheet, even if it rises elsewhere. And the data on sea-level changes in several places actually matches the fact that the Eurasian ice sheet is a big source: sites around Norway and Finland show sea-level decline during this period of high-speed global sea-level rise.

Realigning the history of the Eurasian ice sheet would make it significantly easier to understand where 12 meters of sea level came from, but it also raises some interesting questions. For example, such a huge flow of freshwater into the Norwegian Sea might be expected to increase the all-important South-to-North Conveyor Belt flow in the Atlantic Ocean, but data shows that it was quite strong during that time. used to be. And how exactly did this part of the Eurasian ice sheet collapse so quickly?

That question about the past is important for our future. The portion of the Eurasian ice sheet in question straddled topographic troughs in contact with the ocean, making it vulnerable to rapid collapse. The same goes for the current West Antarctic Ice Sheet – the biggest wildcard for future sea level rise. Every ice sheet is different and the local details matter, but an equally rapid collapse of ice in Antarctica would be a worst-case scenario.