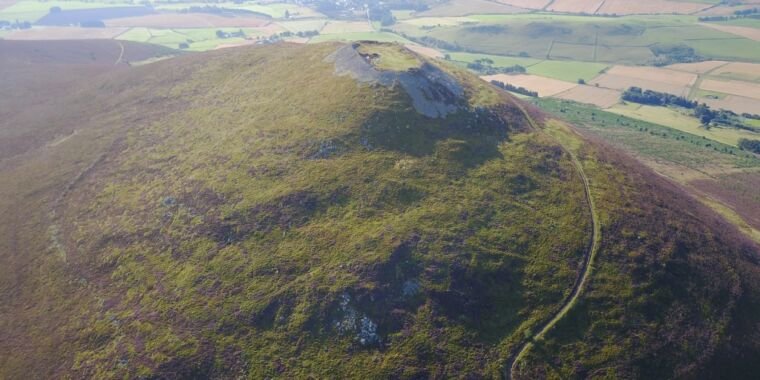 On a hilltop overlooking a small Scottish village lie the buried remains of the largest settlement in medieval Britain. About 4,000 people lived within the community’s earthen ramparts during its heyday in the 400s and 500s CE. That is around the time when the Picts of northeastern Scotland united into kingdoms to defend themselves against rival groups.

Until recently, archaeologists assumed that the fortified community was much older and much smaller. But a recent lidar survey, combined with excavations on the hill, revealed a major urban center that thrived in the centuries just after Rome left Britain. A drone with lidar instruments sent over the site, called Tap O’Noth, mapped the long-buried foundations of about 800 huts, clustered in groups and along trails. The cabins were all within 17 acres, surrounded by an earth wall on the lower slopes of Tap O’Noth. If each hut is home to about four or five people, that’s a total population of 3,200 to 4,000.

“That borders on urban scale, and in a Pictish context we have nothing else to compare it to. We had previously assumed that you would have to be in Scotland around the 12th century before settlements started to reach this size,” said archaeologist Gordon Noble of the University of Aberdeen. In an email to Ars, he added: “We really don’t have any parallels for such a large site in early medieval Britain.”

“We have nothing else that compares to this.”

The Picts were a Celtic-speaking culture that lived mainly through raising livestock and growing grains and vegetables. Until the arrival of the Romans in 43 CE, most Picts lived in small communities, but the threat of Roman invasion changed everything. It wasn’t long before the small Pictish farming communities largely disappeared from the map.

“In the 3rd and 4th centuries, people may have gathered in places like this in response to the threat of attack from the Roman Empire,” Noble told Ars. “There were several Roman campaigns in northeastern Scotland, and the Picts were a known enemy of the Romans.”

That seems to have happened at Tap O’Noth. The oldest hill fort, located on the top of the hill, dates to between 400 and 100 BC, and radiocarbon dates from a few test excavations at the site suggest the settlement began to grow in the 200s AD. But the lowest, widest circle of ramparts was built in the 400s.

“We’re not sure if Tap O’ Noth was a permanent settlement,” Noble told Ars. “It could have been a seasonal gathering place where people gathered at certain times of the year. However, an enormous amount of labor has gone into the site and its defenses, so it could be a year-round settlement – in that case, given the restrictions on farmland, it seems likely that the community would need to be supported by tribute or representation of a wider population.”

The large, fortified community was part of a complex Pictish landscape that is a little difficult to see in today’s rural setting. Another fortified settlement in nearby Cairnmore dates from the same period, although it is much smaller than the one at Tap O’Noth (after all, anything from medieval Britain is smaller than the settlement at Tap O’Noth). And in the valley below Tap O’Noth, on what is now Barflat Farm, archaeologists have unearthed another fortified settlement that appears to have had distant trade links. Excavations have found goods from the rest of Europe: Mediterranean wine, French glassware and intensive metal production. A carved standing stone, known locally as Rhynie Man, also still stands on the site.

Noble and his colleagues aren’t sure yet how all of these Pictish sites fit together, but the sites undoubtedly had shared social, political and economic ties. There were probably a number of early Pictish kingdoms that arose after the retreat of the Romans. Noble says that after the Roman threat disappeared, these Pictish groups banded together to defend against aggressive neighbors and rival kingdoms.

But whether Tap O’Noth was the economic base for a political center at nearby Barflat Farm, with its abundance of foreign luxury goods – or vice versa – is not yet clear.

“It could be that this was the community that supported an early Pictish royal line on the Barflat farm or it could be the elite community that used Barflat as a ceremonial center,” Noble told Tars. “In either scenario, I think we’re getting a glimpse of the rise of the Pictish kingdoms through work on sites like Tap O’ Noth.”

Where ancient and modern worlds overlap

Based on the layout of the huts, Noble and his colleagues have suggested that the settlements were probably all built and used around the same time. To be sure, Noble told Ars, archaeologists will have to excavate more of the hut platforms; so far they have only excavated artifacts and radiocarbon dated artifacts of two.

“We really need to dig more platforms to assess how many are really contemporary or if there was a smaller population that used different parts of the site over time,” he said. “We also want to see if we can assess permanent versus seasonal use of the platforms using soil science techniques and further dating.”

Meanwhile, the remains of an early Pictish kingdom lie beneath the hills and valleys surrounding the modern village of Rhynie, home to a few hundred people. While agriculture and ranching are still the lifeblood of the area, it’s a far cry from the bustling centers that dotted the country 1,500 or 1,600 years ago.

“In terms of size compared to the modern population, this happens a lot,” explains Noble. “The royal centers of Scone of Forteviot (later Pictish/Scottish royal centres) are now just small villages. The political centers are shifting, and with them the population.”