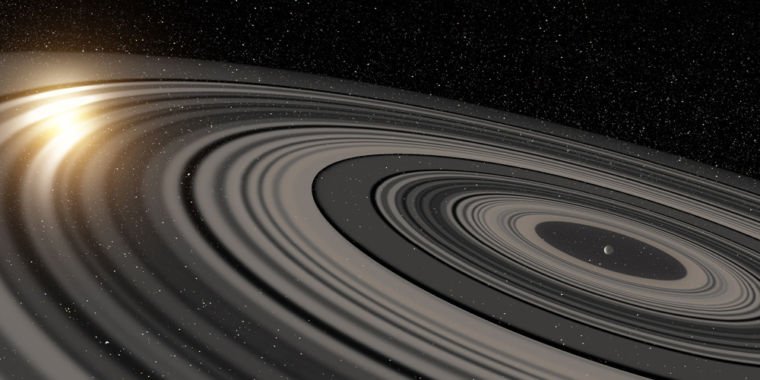 Tabby’s star, which is undergoing a chaotic pattern of dimming, has drawn a lot of attention due to suggestions that an alien-built megastructure could be in orbit. But it’s not the only star with a strange dimming pattern. Astronomers have now taken a closer look at one called PDS 110 and have come up with a possible explanation for the pattern: a giant planet with rings that orbits outside the plane of most of the other material in the system.

While it’s a rather vague statement, the good news is that we should be able to get more data soon. The planet’s next transit is expected to be in September, and the dimming should be clear enough to be visible to amateur astronomers.

Dive deep into the archives

PDS 110 is located just over 1100 light-years from Earth. It’s similar to our sun in terms of mass, but it’s much, much younger; estimates are that it is less than 10 million years old. At that age, it is still expected to have a large disk of dust and gas that may form planets. But the images of PDS 110 show no trace of dust, indicating that the disk is at an angle where the star is not obscured from Earth’s perspective.

Since planets form in the same plane as the disk, we wouldn’t expect any of them to pass between the star and Earth. That would prevent them from being detected by following a regular dimming of the star’s light as the planet orbits the Earth.

Yet something dims the light of PDS 100 in a rather significant way. The eclipse lasts 30 days and about 30 percent of the star’s light is blocked.

Researchers first saw this blur in data from the WASP telescope in 2011, leading them to delve into the archives to look for other telescopes that might have imaged the star. They found data from the INTEGRAL space telescope, which looked at PDS 110 14 different times. And the All-Sky Automated Survey had been observing the star on and off for nearly a decade. But neither showed anything like the 30 percent drop in brightness.

They finally ran into trouble when they checked data from the KELT-South telescope (KELT, of course, stands for the Kilodegree Extremely Small Telescope). KELT happened to catch a second solar eclipse of extremely similar depth and duration. The authors estimate that something orbited the star every 808 days, give or take a few. That’s a little over 2.2 years, which would place the object a little beyond Mars’ orbit.

(With all the observations we’ve made of PDS 110, it was just bad luck that only two of them covered one of these eclipses. You can practically hear the authors gritting their teeth as they write, “Despite 25 seasons of data spanning 15 years and five surveys, all other predicted solar eclipses lie in observing gaps.”)

What is this thing?

What the observations don’t clearly indicate is what we’re looking at. Since PDS 110 likely has a large, dusty disk, the simplest explanation would be an area of ​​high dust density in that disk. Except there’s no indication we’ll be able to see the drive at other times. Any high-density region should therefore extend quite far beyond the plane of the disk — far enough that the disk’s gravity would shear it very quickly. So the authors don’t think that’s a very good explanation. Similar issues exist for some alternative explanations, such as debris from an intra-disk collision.

So they consider a planet instead. But the star’s light doesn’t appear to be caused by a planet. Planets do not transmit light, so the star’s loss of light suddenly bottoms out and remains at this bottom for almost the entire length of the transit. PDS 110, on the other hand, shows a slight downward slope, indicating that anything that passes in front of the star is partially transparent. This rules out both a planet and a faint companion star. Instead, it looks more like the kind of thin collection of dust that was ruled out by the considerations above.

So the team returns to that explanation, but this time adds something to keep the material together: “The simplest way to concentrate material is with the pull of a huge body.” In other words, there is a large planet orbiting the star and a disc of material orbiting the planet. In other words, we may be watching a super Saturn pass in front of the star.

The authors calculate it would have rings that extend 0.3 astronomical units — a bit shy of the Sun’s distance from Mercury. To keep something so big together, a correspondingly large planet is needed. It must be at least twice the size of Jupiter, and it could be as much as 70 times the mass of Jupiter, right on the borderline of a brown dwarf star.

There are some problems with this idea. First, the planet itself should have been pushed out of the planet-forming disc through interactions with other planets. And the rings must rotate in a plane perpendicular to that of the star’s disk. It’s not clear how often either occurs, but they can occur (for example, Uranus has rings perpendicular to the rest of our own solar system). And there is a precedent for a planet with rings outside our solar system: 1SWASP J1407.

What we need right now is more data. Handy, some will be on their way soon. If the team is correct, the next transit will take place from September 9-30, later this year. While it will only be visible from ground-based telescopes for a few hours each night, rest assured that the researchers have requested observation time on space-based hardware.