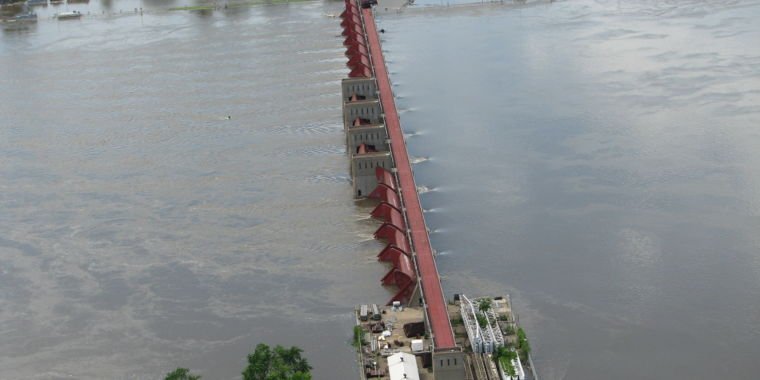 It’s hard to get an idea of ​​the size of the Mississippi River without seeing it. It drains water from 31 of the 48 contiguous states, along with parts of Canada, and outflows can average up to 20,000 cubic meters of water per second. When something this huge floods, it can be a staggeringly destructive event, one that can affect multiple states as the wave of water makes its way downstream to the ocean.

Accordingly, people have tried to mitigate the effects of flooding by building structures that enclose the river and direct its flooding. But as floods continue to plague the river basin, including a massive flood in 2011, people are beginning to wonder if the structures we’ve built just made things worse. A new study reaches back 500 years to collect data on past floods and answers that question with yes.

For a river like the Mississippi, floods are erratic events, meaning figuring out trends requires many years of data. A ten-year hiatus from flooding, for example, won’t tell you whether you’re safer or happier. And here the relatively recent settlement of the North American interior is working against us; the first hardware to measure the flow of the river was not installed until around 1900. So how do you analyze a history that doesn’t exist?

For a US-UK research collaboration, the answer was to build your own history. The researchers relied on so-called “oxbow lakes,” curved sections of potential riverbed cut off from the main Mississippi River unless there is a flood. During the floods, the river dumps heavier sediment than the normal accumulation in the lake. The research team took sediment cores and used the size and composition of the sediment grains to create a history of the river’s flooding.

This was supplemented with tree ring analysis. It turns out that trees do not show their normal growth patterns when they spend time underwater, and this is reflected in the growth rings that are deposited as the tree grows. Combined, the two yielded a record dating back to nearly 1500, with more sites providing data by the 18th century. The overlap with when instrument data became available shows that this record accurately reflects the history of the Mississippi floods, and that some individual floods can be picked out in the historical record.

The main trend in the data is clear: it’s gotten worse. “The highest rates of floodplain flooding and the largest runoff events of the past 500 years have occurred in the past century,” the authors conclude. Note that it says ‘rate’. The magnitude of recent floods is comparable to those centuries ago; the problem is that these major floods are much more common. The increase began to become apparent about 150 years ago, which the authors say is around the same time as intensive farming in the areas around the Mississippi and its tributaries.

But that’s not the only trend visible in the data. There are also cyclical signals associated with major climate cycles. The strongest correlation is with El Niño events, but there is also a connection with the Atlantic Multidecadal Oscillation, meaning floods are influenced by cycles that occur on both coasts of North America. The authors suggest that El Niños results in more rainfall overall, making parts of the Mississippi River basin saturated and more prone to flooding. The Atlantic multidecadal oscillation, they suggest, affects the circulation of wetland air north of the Gulf of Mexico.

Both influences are still present, even though the frequency of flooding has increased.

There are two obvious things that can generate the trend, and both involve us. The first is climate change, which could alter precipitation patterns in North America, directly impacting the amount of water in the Mississippi. The second relates to our efforts to manage flooding and the changes we are making to allow large cargo ships to use the river, which could inadvertently increase the frequency of flooding.

To analyze this, the authors assumed that climate factors would act through El Niño and the Atlantic Multidecadal Oscillation. So they analyzed whether these had changed over the past century. This analysis suggested that changes in these two climate cycles could lead to a five percent increase in flooding frequency. However, the actual increase was four times greater. As a result, they conclude that most of the effect is due to “human adaptations to the river and catchment area.”

And this, they say, should have policy implications: “Our key finding — that river engineering has increased the flood hazard on the lower Mississippi to levels unprecedented in the past five centuries — adds to a growing list of external costs associated with conventional flooding. mitigation and navigation projects.” But it’s not clear that their analysis is so convincing. Precipitation in the northeastern part of the Mississippi River Basin has increased in both total and intensity in our warming climate, and that trend is not linked to either of the two climate cycles.

There is still some work to be done before we can definitively point the finger at our changes to the river itself. But the sheer scale and associated costs of Mississippi flooding make this a possibility that should be taken seriously.