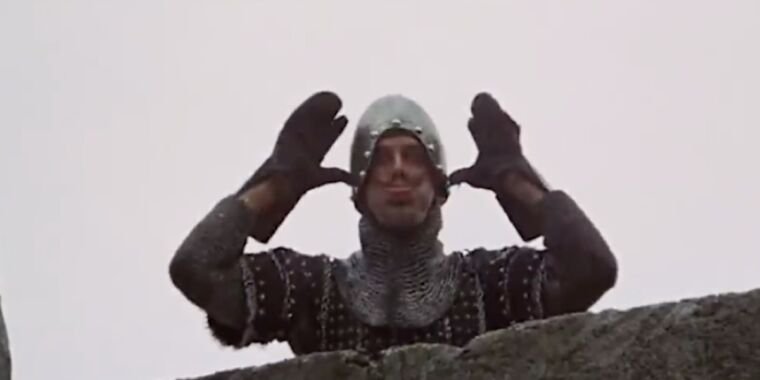 Scotland has much to commend: impressive architecture, beautiful highlands and a long, distinguished intellectual tradition from which some of the western world’s greatest thinkers have sprung over several centuries. It is also apparently home to a medieval manuscript that contains the earliest known use of the epithet ‘F#$%’.

[UPDATE 4/7/2020: Kristin Uscinski, a medieval historian at the State University of New York, Purchase, wrote in to inform us of an even earlier appearance of the F-word in the English language, “Roger F$#%-by-the-Navel who appears in some court records from 1310-11.  I always make sure my students are aware of good ole Roger.”]

The profanity occurs in a poem recorded by a bored student in Edinburgh while locked up as the plague ravaged Europe – something we all have to deal with these days. The poem is getting renewed attention thanks to its inclusion in an upcoming BBC Scotland documentary that explores the long, proud tradition of the land of curses. Scotland — contains strong language†

The Bannatyne Manuscript takes its name from a young 16th-century Edinburgh merchant named George Bannatyne, who composed the approximately 400 poems in late 1568 while trapped at home while the plague ravaged his town. It is an anthology of Scottish literature, particularly the texts of poems by some of the country’s greatest bards (known as makars) in the 15th and 16th centuries. According to a spokeswoman for the National Library of Scotland (where the manuscript is housed): “The manuscript has long been known to contain some strong swear words that are now common in everyday language, although at the time they were widely used in benign joke.”

The five sections of the compilation are devoted to religious themes, moral or philosophical themes, love ballads, fables and allegories, and comedy, especially satire. You are most likely to encounter the curses in the latter section, particularly in the poetry of William Dunbar and Walter Kennedy. Both poets are featured in the poem which features the infamous F-word, “The Flying of Dunbar and Kennedie.”

Flying is a poetic genre in Scotland – essentially a poetry battle or rap battle, in which participants exchange creative insults with as much verbal firecrackers (doubling and tripling rhymes, lots of alliteration) as they can muster. (It’s a safe bet that Shakespeare excelled at this art form.)

Dunbar and Kennedy would face each other for a flight in the court of James IV of Scotland about 1500, and their exchange was recorded for posterity in Bannatyne’s manuscript. In the poem, Dunbar makes fun of, for example, Kennedy’s Highland dialect, as well as his personal appearance, and suggests that his opponent enjoys having sexual intercourse with horses. Kennedy retaliates with attacks on Dunbar’s short stature and lack of control over his gut, suggesting that his rival takes inspiration from drinking “frog spawn” from the water of a rural pond. You get the idea.

And then comes the historic moment: an insult with the phrase “wan fukkit funling,” the earliest known surviving record of the F-word.

Of course, as the BBC Scotland documentary points out, that first “F#%$” is nothing compared to author James Kelman’s 1994 stream-of-consciousness novel, What time was it, what time?† The work is notable not only because it won the Booker Prize and is written in a simple Scottish dialect, but also because it uses the F-word more than 4,000 times. Bannatyne would be proud of the legacy his first “F$#%” had made.