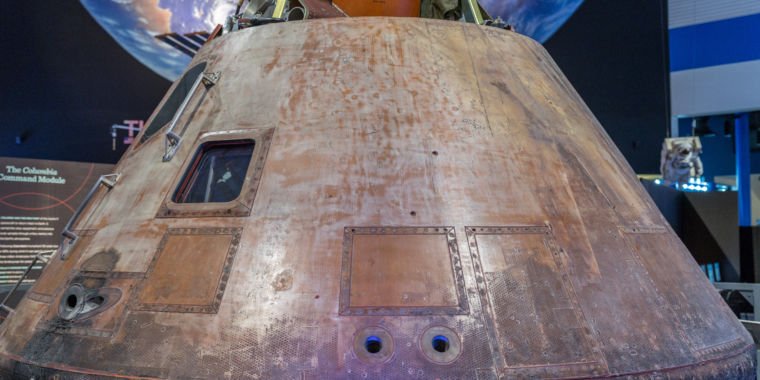 HOUSTON — After Neil Armstrong, Buzz Aldrin, and Michael Collins were taken to the moon in 1969, the Apollo 11 command module crashed into the Pacific Ocean. The spacecraft then returned to Houston with the astronauts before embarking on a trip to all 50 states in 1970 and 1971. An estimated three million people visited the spacecraft en route, as it stopped in one city per state, usually the capital.

After that tour, the historic capsule was installed in the Smithsonian’s National Air and Space Museum, where it remained as one of the institution’s most prized artifacts. Now the 3.9 meter wide spacecraft is finally going on tour again. It won’t visit all 50 states, but instead a select few cities: Houston, St. Louis, Pittsburgh and, finally, for the 50th anniversary of the Apollo 11 landing in 2019, Seattle. The latter city gets the credit because Amazon founder Jeff Bezos is one of the signatories to the tour.

The capsule will make its first public appearance on Saturday, October 14 at Space Center Houston. During a media preview, we got a peek inside the exhibit, putting visitors just over an arm’s length from the capsule. Up close, we could see how hard the return journey through the atmosphere was on the spacecraft’s heat shield, as well as the wear and tear on the reaction control system’s thrusters. The capsule is indeed an iconic sight to behold, and it looks all the better for a thorough cleaning and preservation effort before the tour began.

During its engagement until March 2018 at the Visitor Center near Johnson Space Center, space enthusiasts can see both the Apollo 11 capsule and, in a nearby exhibit, the Apollo 17 capsule. Both vehicles have been launched to the moon and back and are similar. “This is an opportunity to see the historic bookends of the Apollo program,” said William Harris, president and chief executive of Space Center Houston.

Other intriguing objects in the “Destination Moon” exhibit include the visor and gloves Aldrin wore on the lunar surface, a shiny lunar sample return container, Michael Collins’ Omega Speedmaster watch, and more. A 3D tour of the spacecraft also highlights graffiti left in the “Columbia” module by the astronauts. There is of course also a moonstone.

Taking place on the 50th anniversary of NASA’s moon landings, this four-city tour is a welcome addition to efforts to highlight the amazing things humans can do in space with clear goals and the funding to achieve them. In the coming months, Ars will launch his own ambitious series to commemorate the Apollo program, from its successes and trials to a legacy that reverberates even today in the spaceflight community.