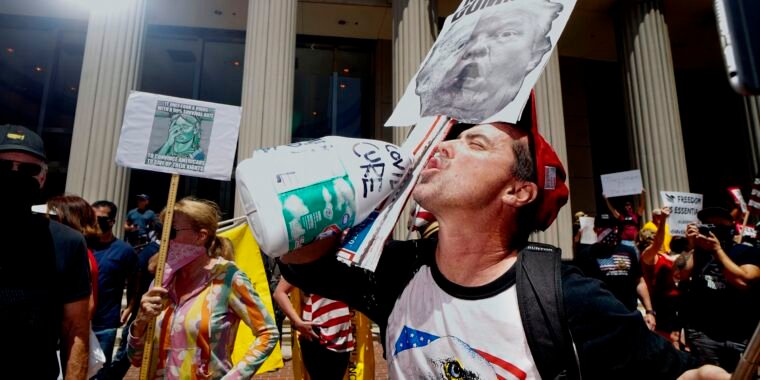 On April 23, President Donald Trump told a news conference that scientists had learned, among other things, that the SARS-CoV-2 virus was the fact that it could be neutralized by sunlight or bleach. During the conference’s Q&A session, he went on to suggest that knowledge could somehow be used to disinfect the lungs of COVID-19 patients, saying:

And then I see the sanitizer, where it knocks it out in a minute. A minute. And is there a way we can do something like that, by injection on the inside or almost a cleanse. Because you see it get into the lungs and it does a huge number on the lungs. So it would be interesting to check that. So you will have to use doctors for that. But it sounds – it sounds interesting to me.

So we’ll see. But the whole concept of the light, the way it kills it in one minute, that’s pretty powerful.

The freewheeling response sparked widespread ridicule and much concern that such advice, coming from such a prominent figure, might lead frightened Americans to take bleach as a way to ward off the disease. But on Tuesday, the American Association of Poison Control Centers released National Poison Data System data collected from around the country, exonerating Trump.

Yes, there has been a significant increase in calls to poison control centers related to exposure to bleach, sanitizers, and also hand sanitizer — something we reported on in response to Trump’s comments. But the data clearly shows that the rise in these exposures started in March — not six weeks later when Trump made his remarks.

For example, in January and February of this year, the number of bleach exposure cases was about the same as the same months in 2019: about 3,000 per month. In March, however, this peaked to 5,068 cases, with the chart showing the number steadily growing in the middle of that month, several weeks before Trump’s press conference. While there was an even higher total in April – 5,739 cases, compared to 3,242 in April 2019 – the chart shows that the peak in bleach exposure actually occurred at the beginning of that month. Comparing the same period (January 1 to May 10) for both years, the NPDS found a 38 percent increase in bleach exposure in 2020.

Breaking down by age distribution, it appears that the vast majority of hand sanitizer cases were for children ages 0 to 5. While this age group was well represented in the bleach and sanitizer data, there were nearly as many cases involving people of that age. 20 to 39 for both types of detergents.

If there’s any good news from this data, it’s that only a small percentage of cases reported to poison centers were classified as having a major effect. There were no recorded deaths from bleach exposure, and the majority of bleach, disinfectant, or hand sanitizer exposures were assessed as having no or minimal clinical effect.