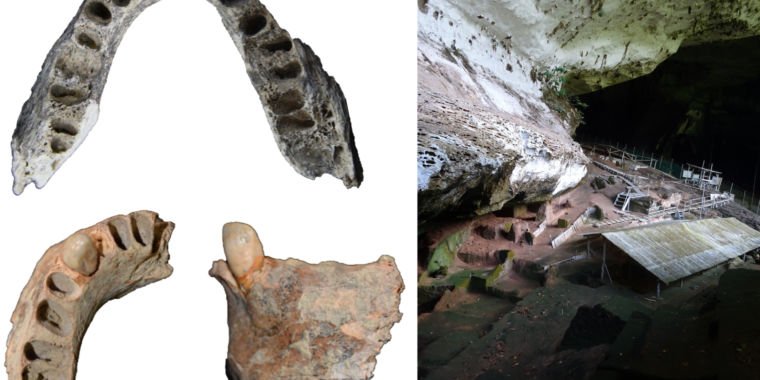 Life was not easy for the first people to settle on the islands of Southeast Asia. The rainforest was a completely new environment for humans in the Late Pleistocene, so the learning curve was probably steep. A 28,000-year-old jawbone from Niah Cave in northeast Borneo reveals that Pleistocene people who first arrived there ate a heavy diet.

The lower jaw belonged to a person who lived and died in Borneo nearly 10,000 years before the end of the last ice age, about 28,000 to 30,000 years ago, according to uranium series dating (there wasn’t enough collagen in the bone for radiocarbon dating). It’s small, but it’s also unusually thick. Even without other bones, the jaw tells us two important things about the Southeast Asians of the Pleistocene.

First, they were small. The jawbone is part of an adult lower jaw, but the height points to a person of short stature and small body size. That’s something the ancient Niah Cave person has in common with the modern Indigenous people of the highlands of Borneo and the Philippines. It’s also a very practical adaptation to rainforest life, according to archaeologist Darren Curnoe of the University of New South Wales — another way human diversity has been shaped by our long relationship with our environment.

Despite its small size, the Niah Cave’s lower jaw is very robust, especially at points where the chewing muscles attach and at the base of the molars, meaning this individual has chewed a lot hard.

“It’s a remarkably robustly built biscuit,” Curnoe told Ars. “The jaw is huge from side to side, and it has clear markings and well-shaped grooves where very large muscles were attached to move and support it while chewing.”

That is not a hereditary trait; Like strong muscles and bones elsewhere in the body, a firm jaw is part of exercise. Especially during childhood development, the bone thickens to handle the load. “It seems more likely that the Niah Cave people used their molars at the back of their jaws to chew hard on tough foods, because this is where their jawbones are thickest.”

Studies of Arctic hunter-gatherers showed that a steady diet of stored or dried meat led to a similar thickening of the jaw. But what did people in Pleistocene Borneo chew on?

Unfortunately, the ancient jawbone contained no teeth, which archaeologists could have examined for microscopic wear marks or chemical isotopes that could reveal details about ancient diets. However, the archaeological finds at Niah Cave offer some information. Animal bones abound in the cave, suggesting that people ate large amounts of meat here.

And starch grains found in the sediment in the western mouth of Niah Cave, near where the jawbone was discovered, suggest that several species of palm were an important part of the Niah Cave diet, with hearts of palm, fruit and nuts and even leaves . There is also evidence that yams were staples.

Except for the yams, which had to be cooked to be safe to eat, people would have eaten most of their food raw; there’s little evidence of log fires or cooking in Niah Cave, and most modern hunter-gatherers eat their food raw — and really fresh.

“In fact, most of the hunter-gatherer’s diet is raw food and was often eaten while it was being collected, making it a simple, nutritious and convenient meal,” Curnoe told Ars.

Raw or perhaps dried meat and raw plants can be nutritious and fast, but they make for some chewy chewing, which explains the robustness of the jawbone.

Bones with stories to tell

The jawbone and other fossils were unearthed by archaeologists in 1957, but they were in archives until recently, and some were even preserved among animal remains. That’s a bit surprising, given that human remains from the Pleistocene era are rare in the islands of Southeast Asia, where the climate doesn’t lend itself to preserving bones for thousands of years.

One of the few examples from the region is a partial skull called the Deep Skull, a 30,000 to 39,000-year-old specimen from Niah Cave, and it has been the focus of 60 years of research on Borneo’s ancient people; these other, more fragmentary bones were ignored in records.

“There are many fragments of human jawbone, teeth and parts of the limbs that have been untouched in the museum collection since they were found in the 1950s and 1960s. They too had to tell their story about the ancient inhabitants of Borneo,” says Curnoe, whose team has received approval from the Malaysian government for its investigation.