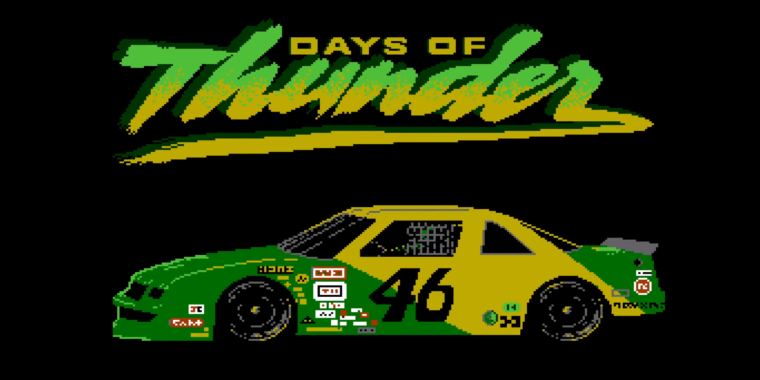 In one of the most unreal data recovery projects we’ve ever heard of, a seemingly lost NES game has been unearthed — archived on a single hard drive backup spread across 21 5.25-inch floppy disks.

A collaborative effort led by the Video Game History Foundation began earlier this year with a pile of leftover CD-Rs, floppy disks, computers and other errata donated by the family of the late programmer/designer Chris Oberth. The results so far are one fully functioning game whose code had to be recovered and then compiled to run on original NES hardware.

Does anyone have a copy of PCTools?

The game in question is based on: days of thunder, a 1990 racing film starring Tom Cruise. One of the reasons this version got lost in the shuffle is because a subsequent DoT video game came out the same year, as published by Mindscape. The co-creation of Oberth, for the same publisher, dates from a year earlier and looks very different. As Frank Cifaldi, co-director of VGHF, points out, the unreleased prototype was mentioned only once by Oberth: in a 2006 interview with the retrogaming fan newsletter Retrogaming Times.

While attempting to recover other lost games from the designer, the archive team discovered a single disc labeled “NINTENDO: HOT ROD TAXI, FINAL”. The restored prototype of this disc yielded a playable “early proof-of-concept” project about cars driving through a city, but its existence, and a short guess that it was somehow related to days of thunderwas enough to focus the archivists’ search on other discs for anything that might need to be coddled to work on an NES.

That guidance paid off when the team found a 21-disk archive of a single hard drive (handily labeled: “PCTools 5.10 Backup”). Miraculously, all 21 discs could be read, and the first attempts to read the archive yielded a file folder with hints of Days of thunder. Ultimately, the team at VGHF used an era-appropriate computer to load PCTools in native MS-DOS, allowing them to extract a jumble of files.

Instead of a ready-made ROM, archivist Rich Whitehouse found the source code, along with most of the game’s data and its assembler, in a single folder. In VGHF’s ​​Monday post, Whitehouse describes the pain it took to find a few key bits of data scattered elsewhere on Oberth’s hard drive backup, most notably a series of “tiles” (as in static pixel art that the NES displays and loops) needed to display the graphics of the game. This file was rather elusive, and he writes:

I extracted every archive in every known format in each of the disk backups and did the same for every other disk image we managed to recover. I did another search on the whole thing, and there was a single hit on a 128 KB binary. Oh yeah.

Without that successful file recovery of “a seemingly unrelated set of data,” Whitehouse and friends say they would have lost the game forever or been forced to write their own resources and envision what it should look like. “Every disk is important,” Whitehouse writes.

Instead, they’ve discovered a simple yet playable racing game focused on the stock car experience: a qualifying race with a 3D effect and zero other cars on the road, and a 2D approach to a traditional, busy race. Mindscape is ultimately days of thunder game featured more trickery in 3D perspective, which may be why it won as the connecting game to reach store shelves.

But despite the lack of parts of the data recovery source data, VGHF decided to write everything the engineers used to write the ROM and publish it to a Github repository so that interested users can learn from the available code and their own versions. can produce. of the discovered ROM. †Update, 1:00 PM ET: The Github link still isn’t live as of press release, but VGHF says it will be “coming soon”.) Should retro gaming aficionados want to memorialize the lost game in a more polished way, they can now work order cartridge copies of the game – with all sales proceeds going to Oberth’s family.

It’s a big data recovery win for a project that started with the hopes of finding Oberth’s more famous lost games, especially when he was working on arcade games for Stern; VGHF is still looking for information on how to recover those games, or other lost software, and the archivists will gladly accept your tips (and apparently destroyed disk backups, because, hey, who knows).