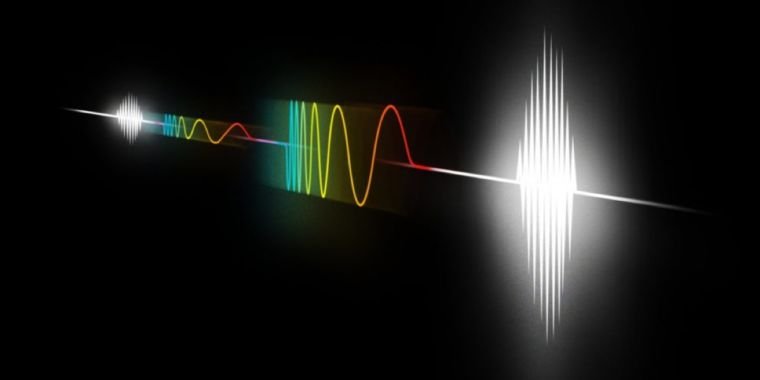 It only took 55 years, but a third woman has finally been recognized with the Nobel Prize in Physics, the Royal Swedish Academy of Sciences announced today. Donna Strickland, a physicist at the University of Waterloo in Canada, is sharing this year’s physics prize with Arthur Ashkin of Bell Laboratories and Gérard Mourou of École Polytechnique, Palaiseau, in France for creating “tools made of light.”

The trio was honored “for groundbreaking inventions in laser physics.” Ashkin invented the so-called “optical tweezers,” tightly focused beams of light that can grab particles, atoms, and living cells; they are now a common tool in biological labs around the world. Mourou and Strickland won the prize for figuring out how to stretch and amplify laser light to create incredibly short, intense bursts of laser pulses. In its press release, the Academy cited the revolutionary nature of this combined work in “unlocking untapped areas of research and a multitude of industrial and medical applications.”

When a reporter asked her what it felt like to be only the third woman in history to be so revered, Strickland replied, “Really? Is that all? I thought there might be more,” adding, “I don’t know what to say but I’m honored to be one of those women.”

Marie Curie shared the prize in 1903 with Henri Becquerel and her husband Pierre Curie for their work on radioactivity. Maria Goeppert-Mayer shared the 1962 prize with E. Paul Wigner and Hans Jensen for her work on the shell structure of atomic nuclei.

This year’s prize is the result of more than a century of prior research in fundamental physics. It took a while to fully develop the underlying technology, but lasers are pretty much ubiquitous these days. Lasers are in our supermarket DVD players and scanners, which are used for optical communications and data storage, as well as for tattoo removal and eye surgery, not to mention their utility for the manufacturing industry. So we tend to take them for granted and forget how much these ingenious devices continue to transform science and technology.

Albert Einstein first raised the possibility of so-called “stimulated emission” in a 1917 paper, the fundamental basis for lasers. It is possible to apply intense flashes of light or electricity to atoms or molecules in a particular medium (for example, a crystal such as ruby ​​or garnet or some type of gas or liquid). This “pumps up” them so that there are more atoms in an excited state than in their natural ground state. If another incoming photon hits an excited atom, it can return that atom to its ground state. The atom will emit a second photon at the same frequency, in the same direction as the bombarding photon. That new photon can take turns hitting another activated atom, releasing another photon, and so on, until all the atoms suddenly discharge in a rapid chain reaction.

Who actually invented the laser is a matter of debate. Bell Laboratories physicists Charles Townes and Arthur Schawlow are most often associated with the invention, although they shared their patent rights with Columbia University scientist Gordon Gould after the latter filed a successful lawsuit. (They invented its predecessor, the maser, which only worked in the microwave regime.)

Theodore Maiman is another physicist often associated with inventing the laser while working at Hughes Aircraft Company in the 1950s and 1960s. He built on the theoretical work of Townes and Schawlow from 1958 to create the first working solid state laser. It used a ruby ​​crystal as the laser medium and was successfully demonstrated in May 1960. Townes himself later acknowledged that “Maiman’s laser had several aspects that were neither considered in our theoretical paper nor discussed by others before the ruby ​​demonstration.” Since then, the laser has been a boon to science.

A trap for light

Optical tweezers were once firmly established in the realm of science fiction, particularly Star Trek’s signature tractor beams. But Arthur Ashkin dreamed of one day using laser beams to move small objects. Light energy isn’t strong enough to move a human, let alone a spaceship, but he reasoned it might be enough to push tiny particles around. He succeeded with small clear spheres. And he noticed that the spheres seemed to be pulling toward the most intense center portion of the laser beam.

This happens because the intensity of the beam, however sharply focused, will decrease from the center to the sides, so the laser light applies uneven pressure to the spheres, pushing them toward the center. It is even possible to make those spheres float by pointing the laser beam upwards. During the press conference, one of the Nobel committee members memorably used a hair dryer to hang a ping pong ball in the air to demonstrate how this works.

Ashkin later added one final twist: He used a strong lens to further focus the laser light so that the particles were trapped in the center of the beam. Voila! He had optical tweezers. After several more years of work, he finally managed to capture individual atoms. More force is needed to grab an atom, which also has its own natural heat vibrations. Ashkin found that he could overcome those challenges by combining optical tweezers with other methods of laser cooling and atom capture.

Those groundbreaking biological applications came about almost by accident. Ashkin continued to experiment with capturing smaller and smaller particles with his optical tweezers, including samples of mosaic virus. One night he left the samples open. In the morning he saw much larger particles in the sample under the microscope: bacteria. And the bacteria also got stuck in the light trap when they swam close to it. The intensity of the green laser beam killed those wayward bacteria, but by switching to infrared light, he found that the bacteria could survive and multiply. Laser tweezers are now a laboratory standard in the life sciences.

Lasers have had many potential applications, but there were limits to the intensity of the rays (i.e, how short the wavelength of light) might be. Above a certain energy threshold, the beams would destroy the amplifying medium. Strickland was a graduate student in Mourou’s lab at the University of Rochester in the 1980s when they realized they could overcome this problem by stretching a short laser pulse to lower the peak power before amplifying it. That way they were able to amplify the pulse without destroying their amplifying material. After that, the pulse could be squeezed again, focusing more light into a small area of ​​space, dramatically increasing the pulse’s intensity.

The technique is known as chirped pulse amplification (CPA) and is now widely used in physics, chemistry and medicine. For example, those intense ultrashort pulses make it possible to record interactions between molecules and atoms, which take place in a millionth of a billionth of a second. Think of it as the world’s fastest camera. High-intensity lasers can also turn electrical insulators into conductors, accurately cut or drill holes in many different materials, or perform laser eye surgery. And many more applications are on the way.

The Royal Swedish Academy of Sciences recently announced an initiative to encourage greater diversity in nominations related to gender, geography and areas of research. That’s great news. Hopefully it won’t be another 55 years before we see another woman — or a member of another underrepresented group — receive the Nobel Prize in Physics.