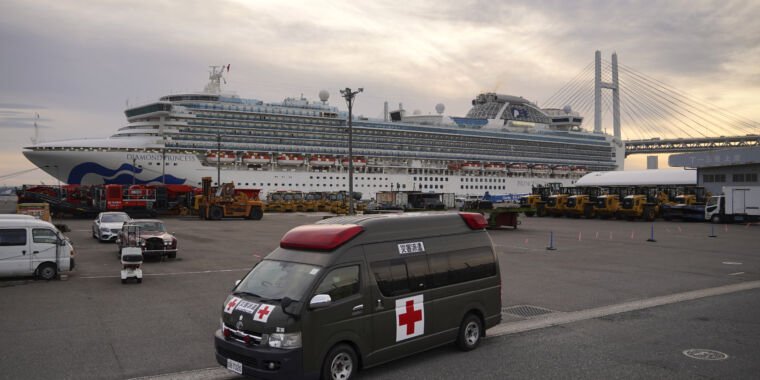 At least 175 people have contracted the 2019 novel coronavirus (2019-nCoV) aboard a luxury cruise ship quarantined in Japan. The latest total includes 39 newly identified passenger and crew cases, plus one case involving a Japanese quarantine officer who worked on the ship.

The breakout on the ship Diamond Princess is the largest outside China, where the virus is believed to have spread to people from animals at a live animal market in Wuhan city, the capital of the central province of Hubei. The leap from virus to humans sparked an explosion of disease, which the World Health Organization formally dubbed COVID-19 yesterday, Feb. 11, short for “coronavirus disease 2019.”

Since the outbreak began in December, there have been more than 45,000 confirmed cases of COVID-19 and at least 1,115 deaths worldwide. But while 2019-nCoV has spread to at least 24 countries outside of China, nearly all COVID-19 cases and all but one deaths have occurred in China.

According to the latest WHO figures, 44,730 cases have been confirmed in China, while the remaining 444 are outside the country, including the 175 cases linked to the Diamond Princess† The number is by far greatest outside the epicenter of the outbreak; the country with the second largest COVID-19 outbreak is Singapore, with 50 confirmed cases, according to the WHO.

While the daily number of new cases in China has dwindled — a potential, but certainly inconclusive sign that the outbreak may be abating — the outbreak has skyrocketed on the ship.

The daily number of global cases has gradually declined from a peak of about 3,900 on Feb. 4 to about 2,000 on Feb. 11. nurture some hope that current efforts to contain the outbreak are working.

Meanwhile, the outbreak on the Diamond Princess— docked and quarantined in Yokohama, south of Tokyo since Feb. 3 — jumped from 10 confirmed cases on Feb. 4 to 175 today. And so far, health officials in Japan have tested only a fraction of the nearly 2,666 guests and 1,045 crew on board at the time of quarantine.

The screening for COVID-19 on the ship began after a previous guest tested positive for the virus in Hong Kong on February 1. The man, who is from Hong Kong, boarded the Princess January 20 in Yokohama at the start of a 14-day tour. The man sailed part of the journey before disembarking during a stop in Hong Kong on Jan. 25. Meanwhile, the ship sailed on. After the news that the guest tested positive on February 1, Diamond Princess returned to Yokohama a day earlier and has been in quarantine ever since, with guests in isolation in their cabins.

It is still unclear when and where the man from Hong Kong became infected and how the virus spread among the people on the ship. The outbreak may have involved a so-called “superspreader,” meaning a single infected patient sheds the virus extremely efficiently and infects an inordinate number of people. But again, it’s unclear how many people brought 2019-nCoV on board and how — or if — the 175 cases are all related.

As a Reuters report noted, about 80 percent of passengers are 60 years of age or older, with 215 in their 80s and nearly a dozen over 90. Those age groups were among the most vulnerable demographics during the outbreak overall.

Testing began with passengers and crew who had symptoms of COVID-19 and/or had contact with the man who tested positive in Hong Kong. At least 439 of the initial 3,711 people on board have been tested. Those who tested positive have been transferred to local hospitals for treatment and isolation. Four of the 175 cases are reported to be serious.

According to local reports, the quarantine officer who tested positive was handing out questionnaires and checking the health of passengers and crew. The officer followed the required precautions, wearing a mask and gloves, but was not wearing full protective clothing.

Japan’s health minister, Katsunobu Kato, now wants to test everyone on board and said he has the resources to do more than 1,000 tests a day.

The situation for Americans on the ship was discussed in a press conference today with Dr. Nancy Messonnier, director of the US Centers for Disease Control and Prevention’s National Center for Immunization and Respiratory Diseases. dr. Messonnier said the agency “worked closely with the embassy in Japan and the Ministry of Foreign Affairs”. Together they think about what the next best steps are, she said.

Some Americans on board have tested positive, but the number of Americans affected is unclear.