14,700 years ago, cannibals performed rituals in this English cave | Techilink 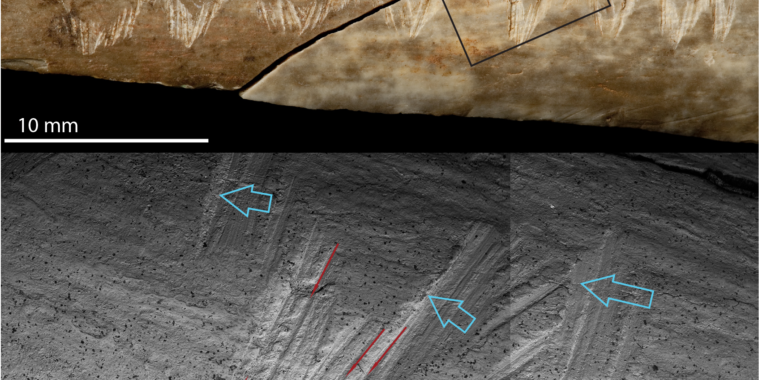 Nestled in the dramatic Cheddar Gorge in Somerset, UK, there is a spacious limestone cave called Gough’s Cave where a few generations of people lived about 14,700 years ago. They littered the floor with the remains of their meals, leaving hundreds of bones for archaeologists to find. Now scientists have analyzed these bones and discovered that some belong to six separate people. And they bear the obvious marks of ritual cannibalism.

Natural History Museum of London scientist Silvia Bello and her colleagues write in PLoS One about the find. The bones came from a child, two adolescents, two adults and an older adult. All showed signs of butchering, which leaves characteristic marks when sharp tools are used for defleshing. The bones were also covered in human teeth marks from biting and gnawing, and some had been broken open to their marrow.

But this was not a murder scene, nor an example of desperate people eating each other during a period of famine. The abundance of animal bones shows that these people had a rich and varied diet. And the human bones were prepared in careful, symbolic ways that suggest Bello and her team witnessed the remains of a complex ritual.

The researchers focused on one remarkably well-preserved adult radius bone, a long bone from the forearm. The inhabitants of Gough Cave had fleshed it out and immediately covered it in a series of repeating designs that look like a row of chevrons or a zigzagging line. It also resembles a row of abstract birds flying up. But there is nothing unusual here – well, except for cannibalism. “The zigzagging pattern itself is not unique to this period,” the researchers note in their paper. “Repetitive geometric designs, sometimes called ‘schematic’ or non-figurative art, are very common in Paleolithic art.”

Immediately after carving these symbols, the Paleolithic group broke open the bone to reach the marrow, presumably to eat. Bello and her colleagues suggest that this may have been part of a funeral ritual, remembering the recently deceased person during the process of defleshing, cutting and eating. It is clear that the bone was not decorated with the idea that it would later be used and displayed – it was broken immediately after the carvings were made.

The most extensive modifications were reserved for cranial bones. Overall, 95 percent of the skull fragments in Gough Cave had been broken off or gnawed in some way. Cave dwellers fashioned them into what archaeologists call “skull cups.” Yes, it just sounds that way. After removing all the soft tissue from a skull, ancient people would break off the top of the skull into the shape of a cup, which was probably used as part of the cannibalism ritual. It’s not certain they ate the faces or brains of the people whose skulls they altered, but the heads certainly got a lot of attention during what the researchers called “intensive processing of whole corpses to extract edible tissues and produce…skull caps.” to call. “

Bello and her colleagues say there is “no doubt” that these sculpted bones “were produced without any utilitarian purpose beyond artistic rendering.” Ritual and art are often intertwined in ancient human history, and the bones in Gough Cave are among the oldest examples of artistic cannibalism ever found. “The carving was an intrinsic part of the multistage cannibalistic ritual and as such the markings must have had symbolic connotation,” the researchers write.

Earlier this year, archaeologists in Spain discovered a set of 10,000-year-old human bones that showed signs of roasting. They were also marked by human bite marks and other ritual carvings. Similar practices have been reported in France.

People living in Turkey at about the same time were modifying skulls, making deep grooves, drilling them, and possibly hanging them from the walls of ancient temples. Human bones played a role in many rituals throughout Europe and the Middle East during this time. This suggests a shared belief system and possible contact between distant communities.

What brought all these groups of people together was a shared need to remember the dead and remember history. Perhaps they ate their dead to include their lives in their families’ ongoing story. By interacting with the bones and flesh of their ancestors, these ancient people kept them alive. In this way, a sense of history may have evolved from cannibalism.