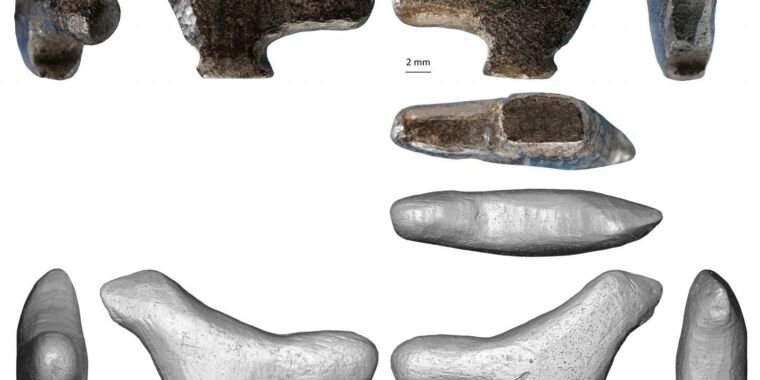 The figurine is a small songbird, about 19.2 mm (0.75 in) long, standing on a pedestal. It is carved from a burnt, blackened fragment of animal bone. Whoever made it was probably a hunter-gatherer living in Lingjing, northern China, towards the end of the last ice age; their culture also made simple pottery and molded black chert into small, sharp blades. To modern eyes, the carving looks quite simple, but it is the work of an artist who managed to combine several techniques (and worked with multiple tools) to form a figure of bone. And that means that by the time the ancient artist put tools on bone 13,300 years ago, the people of northern China had already developed a long and unique tradition of carved bone art.

The songbird in the well

In 1958, a few years before archaeologists realized how much of the past was buried in Lingjing, construction crews dug a pit about 5 meters (16.4 feet) down, scooping out sediment that had accumulated at the end of the last ice age. . The pit diggers piled up all the dirt nearby without paying much attention to the ancient potsherds, stone tools, and other artifacts mixed with it.

When archaeologist Zhanyang Li and colleagues at Shandong University found the pile in 2005, they realized they’d been pretty lucky; normally, when the pit was dug, artifacts from different layers would have mixed together, making it impossible to tell when something came from. But the 1958 crew happened to dig their well in a part of the site where nothing had been buried since the Upper Paleolithic. The only artifacts in their pile of discarded dirt were small black chert leaves and coarsely crafted pottery — distinctive objects very similar to those found in a layer near Lingjing dating to between 14,000 and 13,000 years ago. These were mixed with charcoal and burnt animal bones whose radiocarbon dated to about 13,300 years ago.

Over the past 100,000 years, people have gradually invented ways to use paintings, sculptures and jewelry to express ideas, identify themselves and tell stories. Art began in Africa during the Middle Stone Age, around the time the first members of our species ventured into the geographic crossroads of the Levant. But new forms also appeared in Eurasia, where recent finds suggest that Neanderthals were painting cave walls and making shell beads by this time. Homo sapiens drew in their own artistic traditions.

As our species spread around the world, ancient humans left paintings in caves and rock shelters to mark their presence. At least 42,000 years ago, cave painting flourished in Borneo and Sulawesi. The oldest known carvings are small people and animals carved from mammoth ivory about 40,000 years ago in central Europe. But we’re not sure yet whether the idea of ​​carving 3D figures emerged independently at different times and places, or whether it started in one place and spread as people migrated around the world.

The bird from Lingjing seems to indicate that people in East Asia have invented their own art forms. Zhanyang Li and colleagues say it may be “the first known instance of an original artistic tradition.”

Heat to 300⁰C for about an hour

In other words, the figurine was cut from a different material, with different techniques and in a different style than anything archaeologists have found in Western Europe or Siberia. People in other parts of the world were carving birds around the same time as the artist in Lingjing, but none of them were carved with a pedestal to help them stand up, and they are usually birds of prey rather than songbirds.

Most of the Paleolithic carvings archaeologists have found, such as those in Europe, are of ivory, but in Lingjing the artist used burnt, blackened bone — likely a fragment of the shaft of the limb bone of a local mammal, based on micro-CT scans of the structure of the material. And the ancient artist seems to have heat treated the bone especially before cutting.

If you just throw a bone into a fire, or even hold it over an open flame, it will likely crack, shrink, and warp from the heat. But if you heat bone for just the right amount of time at very low temperatures and keep oxygen away, you get bone that resembles what Zhanyang Li and colleagues in Lingjing found: completely black, but with undamaged structure. That’s not the kind of thing you get right on the first try; it requires specialized knowledge, which probably means that this cutting technique was already deeply rooted in the local tradition when the Lingjing artist learned it 13,300 years ago.

Zhanyang Li and colleagues scanned the figurine with a micro-CT scanner and then mapped out the fine details of the surface with a microscope, and it appears that the next step in the figurine creation was grinding up the burnt fragment with a coarse grindstone and then roughen up the general shape of the bird with something like a stone chisel. It then appears that the artist used sharp stone scrapers to smooth out and refine the final shape, then cut lines on the bird’s head for the eyes and beak.

The microscopic analysis also revealed that many of those grind, chisel and scrape marks had been rubbed smooth, but probably not on purpose. Stripes crossed in random directions, and they matched the kind of wear you’d expect from an item someone carried in a leather bag for a long time. That’s our only hint as to what the bird figurine was for.