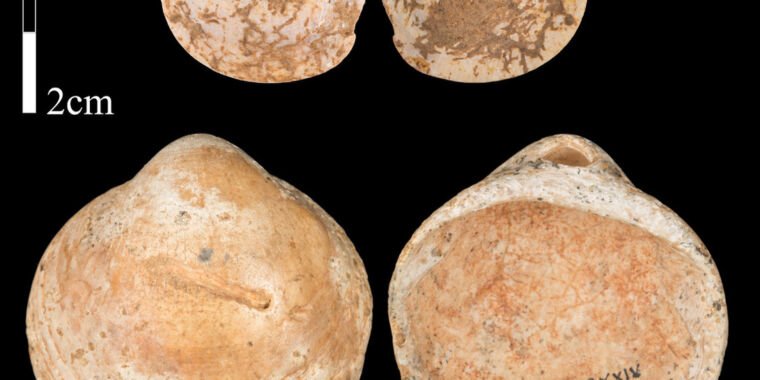 According to a recent study in which archaeologists examined microscopic traces of wear in naturally occurring holes in the shells, people who lived on Israel’s coast 120,000 years ago strung ocher-colored shells on a flax thread. That may shed some light on when humans first invented rope — hinting at the invention of things like clothing, fishing nets, and maybe even seafaring.

Shells on the coast

Picking up shells has been a human habit for almost as long as humans have been. Archaeologists found mussel shells mixed with other artifacts in Israel’s Misliya Cave, buried in layers of sediment dating from 240,000 to 160,000 years ago. The shells were clearly not the remains of Paleolithic seafood dinners; their battered condition had washed them ashore after their former residents had died.

For some reason old people picked them up and took them home.

Shell collectors in Misliya seemed to particularly like intact shells, and there is no sign that they decorated or modified their finds. But 40,000 years later and 40 km (25 miles) away, the people at Qafzeh Cave seemed to prefer collecting mussel shells with small holes near their tops. The holes were natural damage from scraping the seafloor, but people used them to string the shells together to make jewelry or decorations. Archaeologist Daniella Bar-Yosef Mayer and her colleagues at Tel-Aviv University examined five shells from Qafzeh and found microscopic stripes around the edges of the holes — traces that suggest the shells once hung on a string.

Archaeologists even have a good idea of ​​what those 120,000-year-old jewelry looked like. Scuffs around the holes suggest they were hanging from a string, and other scuffs on the edges of the shells suggest the shells were rubbing against each other, so they probably hung close together. And four of the shells still bore traces of ocher yellow pigment. The only thing missing is also the most interesting part: the string.

To find that missing piece, Bar-Yosef Mayer and her colleagues collected some shells themselves. The archaeologists rubbed their modern shells against sand, wood, clay, stone, leather, reeds and various fibers, then used a scanning electron microscope to examine the patterns of pits, polishes and streaks that were left behind. They even made strands of wild flax and hung shells from it — with natural holes — and examined the resulting wear marks under a microscope.

The small marks left by a flax thread rubbing against the edges of the hole resembled the marks on the Qafzeh shells. Although the string itself did not survive, the wear marks on the shells reveal its presence.

One hundred and sixty millennia ago, people collected shells, but apparently didn’t do much else with them. 120,000 years ago, humans had begun stringing shells together and decorating them with red ocher. What has changed in those 40,000 years? According to Bar-Yosef Mayer and her colleagues, someone invented the rope.

If you’re not an archaeologist, dating the invention of string might sound esoteric. But twisting plant or animal fibers into thread is key to many other technologies, from clothing to marine.

“If you make a piece of string, you can make it much longer than a leather strip. With it, for example, you can make a rope that binds wooden logs together to make a raft (or to tie a rigging to a canoe),’ Bar-Yosef Mayer told Ars. String also means people can make things like fishing nets, more intricate types of animal traps, and new types of clothes and bags. Dating the invention of string also indicates when people could have invented those other important technologies.

Maybe it was a draw

But which people? “We don’t know who invented the string –Homo sapiens or Neanderthals,” Bar-Yosef Mayer told Ars.

The oldest real piece of wire we know of so far came from a Neanderthal site called Abri du Maras in France, and it’s about 50,000 years old. Homo sapiens did not reach western Europe until a few thousand years later, but the two species probably had interacted in the Levant for tens of thousands of years (Homo sapiens and Neanderthals seem to switch places a few times in the archaeological record at sites such as the caves of Qafzeh, Misliya and Skhul). Both species could have borrowed the idea of ​​wire from the other. But who deserves credit for the original invention?

The case for Neanderthals rests in part on a fragment of fiber — which may or may not have been a thread — clinging to a 130,000-year-old eagle’s claw in Croatia’s Krapina rock shelter. Elsewhere in Europe, Neanderthals removed eagle talons, and one possible explanation is that they made jewelry or some other type of ornament. And in Spain’s Cueva de los Aviones, archaeologists found seashells decorated with red and yellow pigment — with deliberate holes in them. But without looking for the same sort of wear marks on the Qafzeh shells, it’s impossible to tell whether the Cueva de los Aviones used Neanderthals rope or leather.

On the other hand, archaeologists at sites in South Africa and Morocco have found seashells with naturally worn holes in them, ranging from 115,000 to 70,000 years old. “It would be reasonable to assume that, like the Qafzeh grenades, these were also cocked for display,” Bar-Yosef Mayer and her colleagues wrote. Until now, however, no one has examined those shells for traces of rope wear.

More evidence is needed to unravel the origin of string and all the technologies associated with it. But Bar-Yosef Mayer is optimistic. “It was only in the last decade that we started finding these finds, due to the increased use of microscopy in archaeological research,” she told Ars. “So I’m convinced there’s more to come.”

Archaeologist Ofer Bar-Yosef, a co-author of the study, died in March 2020. He spent nearly 60 years researching Paleolithic archeology in the Levant, China and the Republic of Georgia. At the time of his death, the study had been completed and the publication was still pending publication.

His wife, the study’s lead author, Daniella Bar-Yosef Mayer, told Ars, “I know he would have been very happy and proud to have seen this article.”