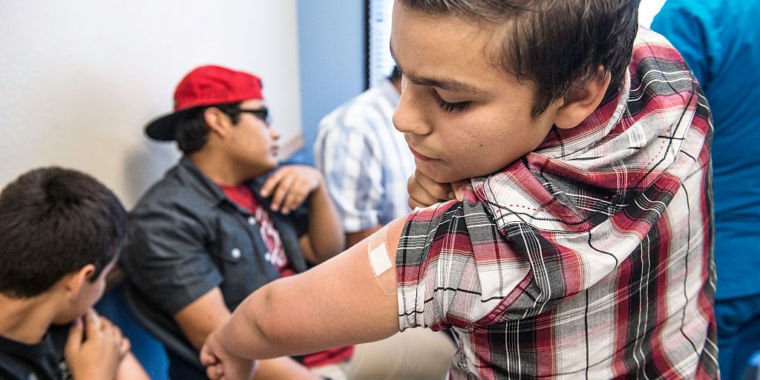 According to a study published Thursday in JAMA Oncology.

The study is the first to look at the prevalence of HPV among American men. Much of the attention paid to HPV in the past has focused on women, as the virus is the cause of nearly every case of cervical cancer in the US. For this reason, health experts have been recommending that girls and young women get vaccinated against HPV since 2006.

Experts updated that recommendation in 2011 to include boys and young men, too, but the new study shows that few actually get those injections — only 10 percent were vaccinated. But with the new prevalence data, the authors suggest that vaccinating men could not only prevent thousands of cancer cases, but could also hold the key to eradicating cancer-causing HPV transmission in general.

The tricky thing about HPV and studying its prevalence is that not all types cause cancer. In fact, many cases cause no symptoms at all and go away on their own — usually between six and eighteen months. Many people will not even know they are infected.

Scientists have found more than 100 strains of the virus, and only about 18 are known to cause or be associated with cancer. That group is referred to as “at risk” species. The low-risk ones are the ones that come and go without notice or stick around and show up as warts. The latest vaccine can protect against nine strains, seven behind the vast majority of cancers and two that cause 90 percent of all warts.

To better understand the prevalence and types of HPV among American men, researchers analyzed penile swabs from a representative sample of 1,868 men between the ages of 18 and 59. The researchers, led by cancer experts at Womack Army Medical Center in Fort Bragg, North Carolina, found that about 45 percent had at least one type of HPV. That represents 34.8 million men nationwide.

DNA testing showed that 25 percent were infected with at least one type of high-risk strain.

The men also showed an unexpected pattern of infection. Among girls and women, those under the age of 20 are most susceptible to infection, with cases decreasing in the older age groups. But for men, incidence increased with the years. In fact, the youngest group, 18 to 22 year olds, had the lowest prevalence at just 28.9 percent. This suggests that both older men and younger men would benefit from vaccination.

The study follows reports of an increase in the incidence of mouth and throat cancer in men, largely attributed to HPV infections. While the study only looked for genital infections (not mouth or throat infections), the new data could provide a useful basis for measuring the success of vaccination campaigns.

Overall, the study’s authors conclude that “HPV vaccination in men may have a greater effect on HPV infection transmission and cancer prevention in men and women than previously believed.” related cancers in the United States.”

This post has been updated to add information about the current HPV vaccine.